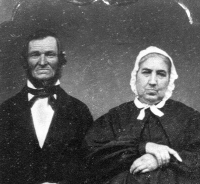 Aaron and Elizabeth Winsor Aldrich, pictured here later in life, were in their early 20s when they arrived in Dover Township in 1816.

It was in 1816 that 23-year-old Aaron Aldrich III, Elizabeth (Betsy) Winsor Aldrich, age 22, and one-year-old son, Aaron IV, set out from Smithfield, Rhode Island, for a new life in Dover Township. With a wagon pulled by oxen, they made the hard journey to Ohio in six weeks.

Betsy’s brother, Henry Winsor, arrived in 1813 and was already settled on Bradley Road. Aaron and Betsy made their home with Henry. Aaron built a log cabin house on the west side of Bradley Road on 21 acres and 60 rods of land in Lot #41 (across from Lakewood Country Club). A second son, William, was born in 1817, and Julia, the third child, was born in 1820. Having been raised in factory life, Aaron became disabled from the excessive labor it took to fell the trees and clear the land. Still he persevered.

In 1822, six years after arriving in Dover, Aaron, unexpectedly received a letter from a stranger with a proposal to take charge of a cotton factory in Otsego County, NY. Aaron was to manage all the manufacturing operations. He would make $1.50 a day or $469 a year.

Aaron decided to take the job and the family returned to New York. Henry, the fourth child, was born in 1822. The family lived in New York for seven years while Aaron increased his earnings. He then accepted a job operating a factory in Watertown, NY. He soon had enough money to again move to Ohio.

The Aldrich family resettled in North Dover in 1829. Their 140-acre farm, part of Lots #98 and #92, extended from the shore of Lake Erie, south to what is now Wolf Road, west to Bradley Road, and east to land deeded to Philo Taylor, the back lot lines of Saddler Road (today, Ednil and Winsor roads).

The deed from Nehemiah Hubbard and Joshua Stow, members of the Connecticut Land Company, says that Aaron and Betsy paid $500 for the 140 acres. The taxes on the farm in 1830 were $5.06.

Aaron and Betsy built a log cabin on the north side of Lake Road, opposite the site where they later built their frame house at 30663 Lake Road in 1830. The Aldrich house is a Bay Village Landmark Home and on the National Register of Historic Places. The Winsors and Aldriches have Bay Village streets named for them.