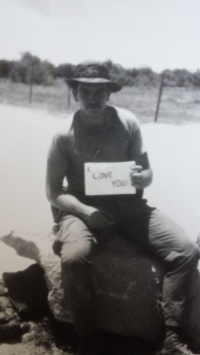 Tim Ptacek had this picture taken while serving in Vietnam and sent it home to his family. He was killed in action in 1969.

This Memorial Day during Bay Village’s ceremonies in Cahoon Memorial Park, the Bay Village American Legion will read the roll of those men and women from Bay Village who have given their lives to keep our country free. On that honor roll are two of Bay High School’s finest who served in the Vietnam War.

William Marcus Barschow was the valedictorian of the Class of 1955. He was president of the National Honor Society, played football and was in the class play. Bill, known as Barsh, was liked and respected. He lived with his mom, dad and sister, Anne, in a house they built on the corner of Bradley and Lake roads.

After high school, Bill went off to Yale University, graduated and joined the Navy. In October 1962, Lt. William Barschow was a Navy officer serving on a destroyer escort during the Cuban Missile Crisis. From there he was assigned to Vietnam as an advisor to the South Vietnamese on the gun boats that plied the Mekong Delta searching out Viet Cong.

When his first tour was over, he signed up for a second. It was during this tour on April 5, 1965, while making a patrol up the Mekong River, that Bill’s gun boat was ambushed by Viet Cong and Bill died from a gunshot wound to the head. Bill was awarded the Silver Star for conspicuous gallantry (53 combat missions), the Air Medal (30 combat missions), and the Purple Heart. The Class of 1955 will honor Bill at their 60th class reunion this September.

Timothy Richard Ptacek, good looking, green eyed, with jet black hair, was the apple of his mother’s eye. He was the fourth child of eight born to Evelyn and Ed Ptacek. Tim grew up on Columbia Road. Being part of such a large family, Tim had to hold his own and loved to tease and play small pranks and jokes on others. He loved sports and parties. During high school, Tim worked at the Marathon gas station on Wolf Road.

Tim graduated from Bay High School in 1968. At that time, if you enlisted in the Army you only went in for two years but if you were drafted, another year was added to your service. Therefore, Tim, having a special girl, decided to enlist. He left for Vietnam in January of 1969.

Tim found himself caught in a firefight, protecting his fellow soldiers and helping the wounded while guarding a bridge for the South Vietnamese. He was shot in his right eye and died on May 21, 1969. Tim was awarded the Purple Heart and Bronze Star. When he was brought home, there was a mile-long funeral procession behind his hearse. He is sorely missed by his family and friends.

A quote from Mike Ranney, who served in WWII and was portrayed in the HBO miniseries "Band of Brothers," is fitting: "I’m treasuring my remark to a grandson who asked, 'Grandpa, were you a hero in the war?' 'No,' I answered, 'but I served in a company of heroes.'"