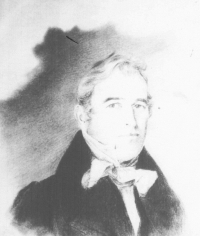 On the morning of Oct. 10, 1810, the Joseph and Lydia Cahoon family wagon stopped at the mouth of a creek on the southern shore of Lake Erie in Ohio country. The sun was shining, the sky was blue, and the family thanked the Lord for their safe journey.

They were in their new home, Lot No. 95 in Dover Township No. 7, Range No. 15, in the State of Connecticut’s Western Reserve after six weeks of wilderness travel from Vergennes, Vermont. They immediately began building a cabin and within the next eight years constructed the first grist mill west of the Cuyahoga River, a sawmill and a house on the west hill. This would become the family home for the next 117 years.

The farm and mills were left to Joel Cahoon, the third son.

Joel married a young widow named Margaret Dickson Van Allen in Frederick City, Maryland, in 1831. Her father was a congressional leader in Washington, D.C., and Margaret grew up in a house across the street from the Capitol. Margaret started attending school when she was 4 years old. Margaret’s extensive education and strong religious beliefs along with Joel’s good work ethic were instilled in their children.

In 1842, Joel brought Margaret and their growing family of 11 to Dover Township. The six boys and five girls grew to be far-sighted entrepreneurs and successful businessmen and women. Thomas was a Cleveland councilman and had a lumber business. Joseph invented a cotton compactor which helped transform the cotton industry in Memphis, Tennessee. Leverett and John Marshal became successful businessmen in the area, building and operating a grocery store and boat house. Leverett became an expert in the viticulture industry in the state of Ohio. Lydia, Laura, Martha and Ida became school teachers in the Cleveland school system, often teaching immigrant children their first English words.

Lydia started the Ladies Aid Society at the Methodist church. Ida was on the township school board and helped procure the Easterly School House for a new Presbyterian church. The family books became the Dover on the Lake Library in the Cahoon house. Land for City Hall was donated by the family to the city. The family permitted train tracks to be laid on their property in exchange for the Dover Train Station being located on Dover Center Road. Parkview School was built on Cahoon land purchased from the city. The farm, left to the citizens of the Village of Bay in the 1917 Cahoon Will, became Cahoon Memorial Park.

The Cahoons left us more than a park. They left the legacy that a good education, along with a good work ethic, produces results and success.

Kay Rothaermel Laughlin, I am the Historian for the Bay Village Historical Society. Member since 1968, and Past President of the society, 1976. My family has lived in the village since 1936.