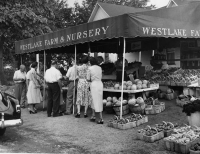 A busy afternoon at the Westlake Farm Market on Detroit Road owned by Harry Kassouf. The market, pictured here in 1952, was located near where McDonald's now stands. Photo courtesy Bay Village Historical Society

It’s not surprising with our Dover Township farmers' ability to grow an abundance of fruits and vegetables that local farm markets would pop up along Center Ridge and Detroit roads in Dover/Westlake and Avon. These were well-traveled roads between Cleveland and Sandusky.

The names of Dusty Miller, Polly, Nagel, Westlake, Danny Boy's and Wade Farm Markets are just a few of the farm markets in our area that offered fruits and vegetables for sale in the 1940s, and '50s. Along with the fresh produce, the local farm markets also offered fresh baked breads, jellies, jams, pickles and flowers. Something to look forward to was taking a drive in the country on a Sunday in the family car and stopping at a favorite farm market.

Everyone had their favorite farm market. I liked Mr. Wade’s stand on Detroit Road. Once the corn was ripe, Mr. Wade had the best corn in the area. Many years later we found out that his delicious corn was really Mr. Sweet’s Corn. The same Sweet’s corn we eat today. (Priscilla Sweet came to the Western Reserve with her husband, Wilber Cahoon, in 1814 and settled in Avon. Wilber was the half brother of Joseph Cahoon, whose family was the first to settle in Dover Township.) Soon other members of the Sweet family settled in the area and we have been enjoying their corn ever since.

Although the big farm markets were on Detroit Road, our Bay farmers had their own small stands set up at the street in front of their homes on Lake Road and offered their extras to the motorists driving back and forth. Some who had stands were the Serb family on Lake Road near Columbia Road; the Mingo family in the old Toensing house on Bradley Road where Wolf Road intersects today; John Eaton, Bay marshal and teacher, formed a farm market on Lake Road where Cal Osborn’s old barn used to sit near the Red Brick School House to teach boys from the high school how to earn and save money during the Depression. The Heckermans, although they lived on Foote Road, had a stand on Lake Road just east of Bassett Road and Meilanders had a stand on Bassett Road.

As times got better and more farm land was lost to houses, the local stands in Bay disappeared.

Today in Bay Village, the Rekstis family still puts out a table at the corner of Bradley and Lake Roads. They share their excess tomatoes, peppers and flowers on the honor system. BAYarts has started a farm market on Thursday evenings in the Huntington Reservation. I think it is important that the farm market is making a comeback today.