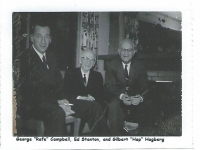 How many people do you know who actually moved to Bay Village for retirement? Gilbert and Vi Hagberg did just that.

When you travel down Osborn Road, glancing at the houses on the south side, you come upon a yard with a little cottage that sits so far back from the road you have to look twice to notice it. At the street near the driveway is a sign that reads “Hap’s Half Acre.” Or at least that’s what it looked like back in the late 1940s when Gilbert "Hap" Hagberg and his wife, Vi, lived at 28889 Osborn Road.

Gilbert and Vi purchased a half acre of land on the south side of Osborn Road. On the south end of the property was a small white cottage. Behind the cottage, Hap planted a berry patch and fruit trees. The area behind the lot was all woods. It was just enough land for Hap to care for in his retirement. Vi became active in the women’s organizations in the Village, and they were regular attendees of the Bay United Methodist Church.

Across the street at 28888 Osborn Road lived the Lemke family. Karen Lemke Murray remembers some of her best childhood memories revolved around the fields behind Grandma and Grandpa Hagberg’s cottage. Vi and Hap weren‘t really Karen’s grandparents, but they might as well have been. They were there in emergencies and good neighbors to everyone on the street.

One of Karen’s favorite memories was berry-picking time. Grandma Vi would call on the phone and let Karen know it was time to pick red and black raspberries. Karen would make sure she had long pants on to avoid the thorny bushes scratching her legs.

“We would spend hours walking the big field and picking berries,” Karen recalls. “Tasting was part of the deal. Hagbergs also had cherry trees on their property. There was a stately old tree (in a child’s eyes) that produced sweet “Bing type” cherries. Those cherries were the best! Grandma Vi would let us pick from that tree and that was the best candy ever. It was the longest walk down the driveway for a little girl. It seemed like an eternity to get to the cottage. Once back there, it was like a whole different world. Those are happy memories that stick in my mind.”

The last Bay Village directory containing the Hagberg name was in 1982. The family moved Hap and Vi to Mentor to be closer to family. Hap died in 1984. What they left behind were some wonderful childhood memories for the Lemke family across the street. This is an area of homes today. Dwight Road is on the west side of the property. The house, though no longer painted white, still stands today.

I am the Historian for the Bay Village Historical Society. Member and Past President of the society - 1976. Lived in the village since 1936.