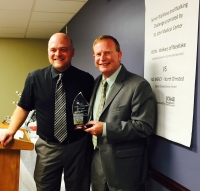 The title of most improved and winning senior center of the first “Bring It On” health challenge has been awarded to North Olmsted Senior Center, following the screenings of over 60 participants from the Westlake and North Olmsted centers.

St. John Medical Center’s community outreach department launched this challenge, sponsored by O’Neill Healthcare, to improve the health of seniors. Health screenings were done at the kick-off event in early June and then again at the end of the six weeks.

The winning team was determined by the most improved scores of its members in cholesterol, blood glucose, blood pressure, weight and BMI, along with the number of walking steps completed. Prizes were awarded to the most improved person in each category and the first trophy was presented to Kevin Kennedy, mayor of North Olmsted, on behalf of the winners.

The next challenge will take place in September – stay tuned to see who will be competing to be named the healthiest senior center.