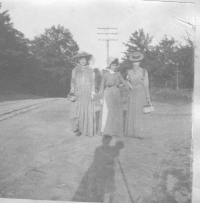 Berry picking wasn't all hard work. In this photo from the Wischmeyer collection, three men from the Village had a little fun posing as female pickers.

Most everyone in Dover Township had a berry patch. Acres of berries and fruit orchards became prevalent with the coming of our German settlers in the 1850s. Apple, peach and cherry orchards sprang up along Walker, Bassett and Bradley roads, where our German farmers settled. Most of the family homes scattered between the farms had small berry patches in their backyards. Well into the 1950s there were berry patches in the Village.

My family's house was in the David Foote apple orchard on Lake Road. We had eight different kinds of apple trees, plus peach trees and cherry trees on our acre. We had gooseberries, currants, quince, strawberries and raspberries in the yard. I remember Mom making jelly, especially currant jelly, and putting the small glass jars out in the backyard under a glass window to cook in the sun. She made many jars of strawberry and raspberry jam from our berries, pouring liquid beeswax on top to seal the jar.

A summer job was picking berries for the farmers. Will Swanker remembers Grandmother Saddler asking him if he would like to pick strawberries for her. She told him he would receive 2 cents a quart. All day, Will picked and ate his way through the strawberry patch. At the end of the day when Grandma saw how few berries he brought in, she suggested he didn’t need to return the next day.

In the 1940s, Janet Zipp Milford loved the Mischelik's pickup truck hauling the Dover Center kids to their farm in Westlake to pick berries. Marilynn Ross, staying at Grandmother Olsen's on Dover Center, and Bob Groff also hopped aboard the truck and picked berries for Mischelik’s. John Peterson remembers picking and eating Mr. Morottos’ strawberry patch on the corner of East Oviatt and Dover Center Road.

Picking berries could make for a long, hot day but in the end it was very rewarding. Yum, yum!