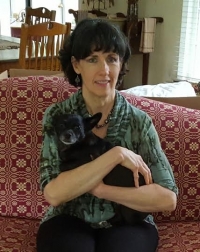 Martha Truchon's Chihuahua, Tess, is happy to be back in her Westlake home after four days on the run.

On Saturday, Sept. 19, I returned home to find Tess, our rescued Chihuahua, missing. I began calling the local police departments, and was told that she was just reported running along I-90 in Rocky River: our worst nightmare. My husband and I immediately drove to the location, but she was nowhere to be found. We hardly knew where to begin.

We hired an online company to create a lost dog flyer and send out a lost dog Amber Alert by telephone to residents in the area. Flyers would be mailed to all local animal hospitals and shelters. My husband and I walked the neighborhoods around our home in Westlake and put up flyers.

Monday came and the Amber alert went out. I receive many calls with sightings of her in Bay Village and Westlake. We were grateful for all the calls, and it gave us hope that she was still alive. We went to each location, posted flyers, and called for her. With no sign of her ourselves, we went home dejected and with heavy hearts. She would be spending a third night outside on her own.

On Tuesday, I received a call from the Westlake police. A caller spotted Tess near my neighborhood. I headed straight there and walked the area for hours calling her name and putting up posters but no luck. As I headed for home, I received a call from Nancy Brown of Hot Diggity Dog who shared her experience and knowledge about what I needed to do to give Tess the best chance of making it home. She told me dogs on the run typically travel at night, and she advised me to leave recently worn clothing and food outside.

Weary from a long day of searching, I returned home and began to settle in for the fourth night of Tess’s absence. I placed her bed, food, and my well-worn socks on our back patio. As I locked up the house and headed to turn in, it dawned on me leave the garage door open.  Around 1 a.m. I heard five distinct tapping noises, and I leaped to the window and called her name. Nothing.

As I headed back to bed, I decided I should probably check the garage. I looked through the peep hole before walking out, and I saw a small black animal move across the garage entrance. It moved so strangely, I could hardly believe it was Tess. I opened the door and she came hobbling right up to me, and I bent and scooped her up in my arms. It was one of those defining moments in life that are never forgotten. Tess was home.

Her coat was scruffy, and she could hardly walk. She had worn the pads raw on the bottoms of her feet. She would not leave my side for the next 24 hours. I learned something important in that short time. There is a huge community of good, kind people living right amongst us willing to reach out and help another person in need.

I am so grateful for all the calls I received that provided information on sightings or offered support. Knowing that Tess was alive and my community was rooting for her, motivated me to work harder to secure her return and believe that, between us all, we could make the miracle happen.

My husband and I are residents of Westlake.