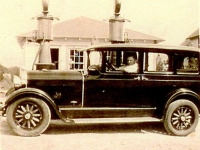 Bill Blaha at the pumps in front of his gas station on Dover Center Road.

When John D. Rockefeller started Standard Oil he realized a need for gas stores for selling his gas and oil. All over Ohio, gas stations began popping up in townships and large cities to supply the demand.

Out in the country, in the little Village of Bay, John D. Rockefeller supplied the gas to a small station built by William Blaha at the intersection of Dover Center and West Oviatt roads. At the time, Dover Center was a dirt road and you drove your car up to the pump, literally, by the side of the road.

In 1914, William Blaha was operating an Edward Foods store in the old Cahoon Store next to the railroad tracks. It being successful, Blaha purchased land to the north of the store at the intersection of West Oviatt and Dover Center Roads with the thought of one day owning his own butcher shop and store. The first building he constructed, however, was a Standard Oil gas station. Standard Oil boasted that they had a "dot’" on their road maps for every township with a pump. When the map came out, the Blaha gas station did not appear on the map. Bill let them know about that, and the next map of Ohio printed had a dot for the Village of Bay.

In 1929, Bill built a new brick building at that location to house his grocery/meat market. The Standard Oil gas pumps remained in front of the brick store, but the gas station was moved back to the side of the lot and the two front doors were replaced with garage doors. Cans of oil, inner tubes, tires and other car supplies sold out of the building for many years. Here the station remained until 2015.

This year the City of Bay Village notified the Peterson family who own the buildings and land (John Peterson’s mother was Marie Blaha Peterson) that the gas station would have to be taken down as the addition on the east side was leaning. The Petersons offered to remove it so the original gas station was standing alone. However, back in the day of construction, the beams across the roof of the gas station were spaced too far apart and not up to code for today. The city advised the Petersons that the problem would need to be corrected if they intended to keep the station.

The family wanted to keep the station since it was a historical building plaqued by the Bay Village Historical Society. The Petersons looked into the extent of construction to bring the station up to code and found the cost to be prohibitive. Consequently, they had the station demolished.

Another piece of Bay Village history gone. The gas station had existed more than 80 years on that spot. Bay seems to be losing so much of its history. Once gone, it can’t be replaced. I know a couple who travel the highways looking for these first gas stations. I advised them Bay had two gas stations from this era: the Rick Burns establishment on the corner of Wolf and Dover Center built by the Bott family in the 1920s, and the Blaha gas station across from West Oviatt built in 1914. Now the Blaha gas station that put Bay Village on the map is gone and the Bott gas station is for sale.