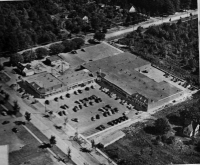 The new Bay Shopping Center, built in 1949. Notice the Scholl farmhouse in the lower right corner. Notice the medical office behind the gas station. Notice the fields and trees. On the east side of Dover Center Road you see the Elizabeth Cahoon house, still standing but for sale today, and on the corner of Normandy and Dover the Fisher family home (now replaced by the PNC Bank building).

When I was a little girl, Dr. Knoll, the village dentist, purchased 250 feet of Lou Scholl’s farm land on the south side of Wolf Road near Dover Center Road. The land was between the Columbia Gas Company building on the east and the Scholl farmhouse on the west. In the middle of his new farmland, he built a red brick, one-story, colonial medical building with a center door and office space on each side. Here he set up his dental practice. Earl Ross, a medical doctor, rented the other side. It was the first medical office building in the village.

Dr. Edward Knoll was the mayor of Bay Village. At the time, the village had a population of 6,600 residents and 1,840 homes. Dr. Knoll predicted that the biggest spurt in population would be in the next 5 years and could reach 25,000 residents in 18 years.

In 1948, the only shopping area in the village was on Dover Center Road near the railroad tracks. Mayor Knoll saw a rising need for more shopping. He decided to move his medical office (today Pizza Hut) behind Ernie Olchen’s gas station and clear the farmland for a shopping center. Construction was actively underway for a $350,000 shopping center, including bowling alley, to open in July 1949.

Excerpts from a newspaper article in July 1949 reads: “Mayor Knoll Makes First Purchase in New Bay Village Shopping Center: The first unit in the new Bay Village Shopping Center was opened on Saturday, July 2, 1949. Promptly at 9:00, Mayor Knoll, president of Bay Knoll Inc., owners of the buildings comprising the shopping center, cut the ribbon in the ceremonies leading to the opening of Avellone Pharmacy, the first unit in upwards of 15 units that will comprise the Bay Shopping Center. After ribbon cutting ceremonies, Dr. Knoll and a crowd of Bay residents and tradesman had a flag raising ceremony. Now the people of Bay Village and its surrounding areas are seeing the realization of a long needed facility for complete shopping needs right in their hometown community. The new center has ample parking conveniently located at the front entrances of all the units which is an important feature of this development. The Nichols 5c and $1.00 Variety Store unit is scheduled to open its doors to the public around July 15, 1949. It will be run by Mr. Kahrs."

The Sept. 25, 1949 Plain Dealer featured an article and picture of the shopping center. It states that “a three day ‘grand opening’ celebration will take place at the Center and will climax with street dancing and a band concert on Saturday night.”

Many had afterschool jobs at the shopping center. My sister, Gay, and I, along with Marilynn Ross Groff worked at the dime store in 1953. I remember Nancy Stokes Miller, Bill Halenkamp and Tom Gustason working at Avellone’s at the same time, just to name a few. I remember Avellone’s sold tuna and egg salad sandwiches and wieners for lunch. They made milk shakes and cherry cokes. Many at the high school took lunch there. Seniors had an hour lunch back then.

Over the years, many stories and memories of the shopping center have survived. The center still serves our residents today as the Bay Village Square shopping plaza.