Dad at the helm of Bay Village PTA 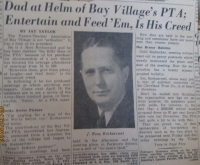 This article about Bay's PTA appeared in the Cleveland News in 1945.

This story begins with my dad, J. Ross Rothaermel. Parkview School was way overcrowded in 1945 and a new elementary school on the west end of town was greatly needed. Attendance at the PTA meetings was down and the village was having difficulties in increasing interest.

World War II had just ended and parents had much on their minds; returning home from the war and putting their lives back together. Still, fathers saw a need to contribute. Understanding the problem, my dad met with the PTA with an idea of how to generate more activity in the PTA and raise interest in a bond issue greatly needed. He offered to be the PTA president if the meetings would be moved to nighttime so the fathers could attend.

To bring in the dads and renew interest, he thought of offering some entertainment along with the important business of our school children. The motto was "Our kids are our best business." The PTA agreed and elected Dad, a young bank executive, president of the PTA.

"The Parent-Teacher Association of Bay Village is not 'orthodox,'" stated a 1945 article in the Cleveland News. “It has a man as its president. He is J. Ross Rothaermel and ... [has a] penchant for showmanship of a sort which has boosted the average attendance of meetings from 75 to 350. ‘I’m angling for a film of the last World Series [for the April meeting],’ said Rothaermel. The unorthodoxy of the Bay Village PTA, manifested last September, stemmed from a question the dads of the village had begun to ask themselves – “Aren’t fathers parents?”

The origin of this Cleveland News story was a visit by Ray Turk, Cleveland News war correspondent, just back from the Pacific, who came out to the Westshore to talk to a PTA group at Bay Village Schools. Ray, a father himself, was interested in school activities and was a member of the Euclid School Board. The Bay Village meeting and the PTA activities in Bay served as an eye opener for the ex-war correspondent. He came back to the office filled with stories about the PTA revolution in Bay. Instead of a woman, the Bay PTA was headed by a man.

“We wish we could have a story such as the Bay Village story every day,” said Turk. “It is indicative of an alert and progressive community. It bespeaks wholesome recreation, and serious accomplishment for a school group interested in the advancement of themselves, their neighbors and their children. PTA activities cannot reach their full estate with women expected to carry on alone. [Remember, this was 1945.] We think J. Ross Rothaermel should be No. 1 speaker on the fall schedule of all PTA groups.”

Don’t be misled into thinking the organization now had no serious purpose. Its members pointed with pride to the fact that a $289,000 school bond proposal drew an 87 percent favorable vote that November. The PTA had quite a bit to do with the passing. They also sponsored two plays to be presented by the Village Players that year. The bond issue was used for the building of Glenview School in 1947, and it is true my dad received phone calls from as far away as California and Chicago when the story went national.

I remember when Dad had U.S. Congresswoman Frances Payne Bolton, who represented our district in the 76th Congress, coming to speak to the PTA one February. There was a terrific snowstorm that day, and Congresswoman Bolton was unable to attend. The PTA had purchased an orchid corsage for the congresswoman. The teachers present put their names in a hat and a name was chosen. The winner was Mrs. Swaim, my second-grade teacher. I remember her proudly wearing the orchid to school the next day.

Oh, by the way, after two years at the helm, Dad was followed by another father, Roland Roehl.