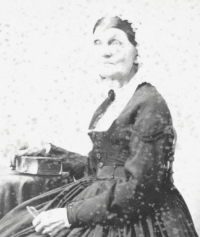 Catherine Porter Foote arrived in Dover Township (now Bay Village) in 1810 at age 4. She lived in the township until her death in 1886.

None of us today can imagine the hardship a pioneer woman and mother dealt with each day. Their Bible study and caring daily for those in need, they saw their tasks to the finish. A tiny woman, Catherine went about her tasks in a positive manner, seeing that all was taken care of.

Four-year-old Catherine Porter traveled with her sister, Emmiline, and her parents, Rebecca and Ashahel Porter, from Waterbury, Connecticut, to Dover Township, Ohio, arriving in the afternoon of Oct. 10, 1810, making the Porter family the second family in Dover Township. Along on the journey were her uncles, Reuben Osborn and Leverett Johnson.

The Porter family built a log cabin near the lake on Lot No. 94, Section 7, Range 15, of Connecticut’s Western Reserve, and set up housekeeping. The next year, 1812, a sister, Angelina, was born and a brother, Dennis, in 1814.

In April 1814, Catherine’s mother, Rebecca Porter, traveled to Cleveland in a row boat with her infant son Dennis, Noah Crocker and George Smith. On the way home, the weather turned stormy and the lake became choppy with swells, forcing the little band to find shelter in the Rocky River. Before they made it to the mouth of the river, the boat overturned and all but Noah Crocker were drowned.

Rebecca and Dennis were the first burials in Lakeside Cemetery. Ashahel Porter, Catherine’s father, distraught over the loss of his wife and son, sold his property on the lake and moved the family to Rockport, Ohio. He died in 1820, leaving Catherine and her two sisters alone. Aunt Sara Osborn took them in and raised them as her own.

Catherine married Ranson (also called Ransom) Foote in 1824, and resided the rest of her life at 30906 Lake Road on the David Foote farm, Lot No. 97. Catherine began her married life in an old log cabin with her in-laws, David and Betsy. David Foote built a frame house in 1828, on the north side of the old Indian path which today is Lake Road. When Betsy passed, Catherine and Ranson moved into the big house to care for David.

Catherine and Ranson had 12 children. By 1846, when Ransom passed away, they had lost two children, leaving Catherine with her father-in-law David and 10 children to care for. The 1850 census shows they employed a domestic and farm hand to help with the farm. In 1850, Catherine was 44 years old and David, 92. The Foote farm stretched from Bradley Road west to the Avon county line and south to just past Walker Road. They had orchards and grew what a family needed to survive. Later on a sawmill was constructed on the property.

Not opposed to adversity, Catherine persevered to keep her large family together. Catherine died in April 1886 at the age of 79. A very religious women, she attended the Dover Lake Shore Methodist Episcopal Church where she was a founding member and her Uncle Epitaph preached.

The Foote farmhouse, built in 1828 and recognized as a Bay Village Landmark Home, was torn down by a developer in the 1990s. The sturdy house built from oak and chestnut was 165 years old. The basement was built from the ballast from the ships that plied the lakes. The Landmark sign for the house is in Rose Hill Museum.