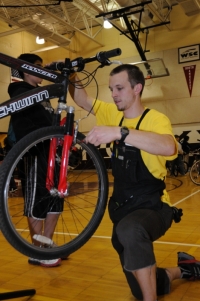 Get your bicycle ready to roll at the Bay Village Bicycle Fair on Thursday, April 28, from 6:00 to 7:30 p.m. at Bay Middle School, 27725 Wolf Road. Residents are invited to bring their bicycles for a free safety inspection and have the chance to win a bicycle helmet, get a free bike license, learn about the benefits of bicycling, and kick off National Bike Month in May. It is free and open to the public.

At the Bay Village Bicycle Safety Fair on April 28:

The Bay Village Bicycle Fair also helps families prepare for the Bay Bike To School Challenge on May 2-20, 2016, which strives to inspire over 1,800 elementary, middle, and high school students in Bay Village to ride their bikes to school as much as possible during three weeks each spring, to help the environment and improve their health. It is part of Century Cycles’ Bike To School Challenge, which is the largest and most successful student bicycling program in the United States that got its start in Bay Village in 2008 and now engages more than 5,000 students in Northeast Ohio each May.

During last year’s Bike To School Challenge, Bay students biked over 44,000 miles, prevented over 44,000 pounds of carbon dioxide from being emitted, saved over $4,800 on gasoline expenditures, and burned a whopping 1.2 million calories bicycling to school for three weeks (the equivalent of almost 6,700 cans of Coca-Cola).