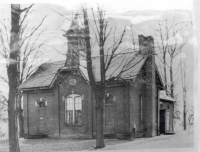 The red brick school house on the south side of Lake Road at interurban Stop #30 was built in 1869.

George Drake was the son of Metta and Frank Lincoln Drake. He was the grandson of Mary Ann Stephens Aldrich and Henry Aldrich. Henry Aldrich was the son of Elizabeth Winsor Aldrich and Aaron Aldrich who first settled in Dover Township in 1816 and built the 1830 Landmark home at Bradley and Lake roads. George inherited the house and lived there until his death. Following are George’s memories, excerpted from "Bay Village: A Way of Life," about the Red Brick School House that used to stand on Lake Road, just east of Bassett Road.

“When I started to school in 1896, the brick school just east of Cal Osborn’s barn at Stop #30 had two rooms and a separate entry for boys and for girls. There was a woodhouse on the west side of the building, and of course, the boys' back house [today known as an outhouse] on the east side and the girls at the west side.

Blackboards were in front [behind the teacher’s desk], and a hall for hats and coats and benches was on the northwest corner for the girls and a hall for the boys in the northeast corner. The teacher’s desk was on a raised platform between the two halls. We got our water from Cal Osborn’s chain pump across the road to the west. We had water in a bucket in the sink on the west side of the room, with a dipper which all the kids used. There were only three in my class, myself and Mabel Osborn were two of them. This was the class that chose the school colors - blue and white.

As the classes were called, we went up to recite. You raised one finger when you wanted a drink and two when you wanted to go out (or was it the other way around?). We played tag in the back yard and 'Andy I over the woodshed.' We also had races around the school building. In the wintertime we brought our sleds and slid on Cal Osborn’s hill [down to the lake]. The thirty kids in the school would gather around the big round stove in the wintertime to keep warm.”

George continued his education in Rocky River and then matriculated at The Ohio State University, majoring in engineering. He worked for the City of Bay Village engineering department for many years.

After Parkview School was built in 1922, the red brick school was used as a theater for Bay Players and a voting precinct. It was torn down in 1941.The school teacher’s desk is in the 1818 Room at Rose Hill Museum.