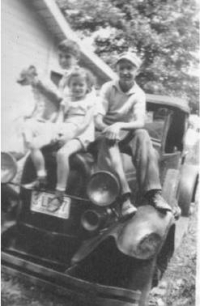 Ralph Talas, Dick Walker and Barbara Rothaermel at the cottage on Woodstock in Avon Lake.

Bob Berger was liked by all. He was a track star and an "A" student at Bay High. His parents, Walter and Martha, were active in the village and friendly to all.

Bob had a sister, Ruth. They lived at 28705 Osborn Road in 1939. Bob joined the United States Air Force after graduation in 1943. He was a Staff Sergeant with the 330th Bomber Squadron, 93rd Bomber Group, Heavy, and stationed in England. During an air mission on Feb. 25, 1945, Bob volunteered to ride with another crew who was missing a member.

During this mission over enemy territory, the plane was hit and the crew bailed out. However, one of the members was injured and not able to help himself. Bob volunteered to take the wounded man with him. He was killed while sharing his parachute with the injured buddy.

The following excerpts are taken from a letter to the Berger family from Lt. Helweg, Bob‘s pilot. (First published in 1945 by Kay Messenger in a village newspaper.)

This is one of the things I just hate to do of anything in the world. Bob, your son, was killed in action. At this time there is little one can say, to ease your sorrow. We all share it with you because Bob was one of the best liked members of my crew. I think I knew Bob a little better than most of the fellas because he often talked to me about his ambitions and aims in life. He was one of the finest men I have ever or will meet. Of the actual incident, I can tell you little because of censorship, but I can tell you he died performing his duty. He was not flying with our crew that day, however, for the first time. … I will send you all information possible as I think you would rather know. I’m sorry censorship restricts me to so few facts. … He and I were taking piano lessons together you know, and I’ll never play but what I won’t think of him. There is nothing I can say but I know Bob was like a brother to me and I in a small way know how you feel. The only consolation I can find is that while on missions we all use “G” channel quite often. If anybody can say that a clean man will always be unafraid, Bob will be unafraid. He lived a clean life with clean thoughts and even though we aren’t maybe doing the right thing, Bob and I often talked and figured that even if we’re wrong our kids won’t have to make that decision and so we were doing what we believed. It’s hard to explain but I think the Lord does things for the best even though its hard to think Bob is in a better world reserved for those who live in the interest of his fellow man like Bob did. Please accept the crew’s and my deepest sympathy in this seemingly dark house.

Bob is buried at Epinal American Cemetery in Dinozé, France, in Plot B, Row 7, Grave 47. He received the Air Medal and Purple Heart.

Ralph Talas spent his young years in Avon Lake living on Woodstock Avenue. My grandfather owned a summer cottage on Woodstock and the Talas family were his next-door neighbors. My cousin, Dick Walker, and Ralph were good friends and played together. Somewhere along the way, the Talas family moved to Bay Village and Ralph graduated from Bay High School in 1939. The Talas family, Vaine and Suri Assar, and sister, Edna Ruth, lived at 484 Kenilworth Road. Ralph joined the U.S. Army Air Force, 513rd Bomber Squadron, 376th Bomber Group, Heavy. He was either the bombardier or the engineer, my sister, Barb, tells me. His plane exploded over the Ploesti Oil Fields in Italy on Oct. 5, 1943. He is buried in the Sicily-Rome American Cemetery in Nettuno, Italy, Plot I, Row 7, Grave 30. He received the Distinguished Flying Cross, Air Medal with 4 Oak Leaf Clusters, and the Purple Heart.