50 years of planning in Westlake 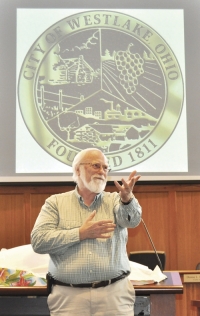 On Thursday, Sept. 15, at 7 p.m., the Westlake Historical Society will be holding a program in Community Room A of the Westlake Recreation Center. All are invited! The program is titled “Fifty Years of Planning in Westlake.” It is titled this because the two speakers that evening have a combined total of 50 years of direct involvement in the planning for the City of Westlake.

Ken Crandall’s first association with the City of Westlake was in 1957 when Westlake was experiencing its first wave of transformation from agricultural community to suburban city, and his various roles in planning for the city continued for 24 years, until 1981.

Robert Parry was Planning Director for 26 years, from 1987 until 2013, during the years that Westlake was the fastest growing community in Cuyahoga County.

These two gentlemen, both planning professionals by education (Cornell and Ohio State) and certification (American Institute of Certified Planners), contributed significantly in making Westlake the great community that it is today. Of course, in order for them to be employed in this capacity there had to be the support of the community and the political leaders during their tenure.

The roots of the planning tradition in Westlake were inspired in part by the City Beautiful Movement which was a reform philosophy of architecture and urban planning that first flourished during the 1890s and 1900s with the intent of introducing beautification and monumental grandeur in cities. It was this movement that created City Planning as a profession. While beautification efforts have  been successfully fought for and won for years in Westlake with strict sign and tree ordinances and design guidelines (prepared by Bob Parry) the monumental grandeur part of the philosophy has only recently been fulfilled in Westlake with Westlake’s 2003 City Hall building and portions of Crocker Park.

Reign S. Hadsell first associated the City Beautiful movement in what would become Westlake in the book “A History and Civics of Dover Village” (available at Porter Library). Draft portions of this book were used in civics classes in Dover in the 1920s and 1930s. In that book, Mr. Hadsell calls for both the removal of unsightly roadside signage and the planting of trees. He wrote that “… a city, to be beautiful, must have attractive homes. However, to get full value from attractive homes, we must have a planned community.”

Dover’s Planning Commission was created by an ordinance of the Village Council in the 1920s. The first zoning ordinance was passed in 1940. Westlake became a city in 1957 and Mr. Crandall came on board that same year as an employee of the Regional Planning Commission assigned as a planner to Westlake. He was involved in the creation of the first Guide Plan for Westlake in 1963. Completed copies were available at the community barber shop! He also laid out the alignment of I-90 through Westlake and the location of many of the Westlake city schools.

Ken Crandall wrote an article about Westlake, published in the May 1961 edition of Alexander Garvin’s "The American City," an urban planning and design book. In it Crandall stated: "Its local government has made planning a part of its general day-to-day operations, not something done on a sporadic basis."

Bob Parry supervised the editing of the updated Guide Plan in 1984 as Deputy Director of the Cuyahoga County Regional Planning Commission and was hired by Mayor Clough during a critical time in Westlake’s development when the physical character of the community could have been compromised. Among his accomplishments while Planning Director was working with the administration, City Council and the private sector for the creation of Crocker Park, the extension of Crocker Road, business incentives, Recreation Center and other public facilities, zoning code updates to allow Cluster housing and Planned Unit Developments and directing a great Westlake Bicentennial year of events in 2011.

On Sept. 15, hear more about how both of these men contributed to the creation of the Westlake we know and love today.

William R. Krause, AICP I am the Assistant Planning Director for the City of Westlake. I have worked for Westlake for 27 years. I served on the Bay Village Planning Commission for 5 years. I was a member of the Reuben Osborn Learning Center Steering Committee. I am a Board Member and Historian for the Westlake Historical Society and a Trustee of the Western Reserve Architectural Historians. I have been married to Debra for 35 years and am the father of three grown children, grandfather of two and owner of two Shih Tzu's and a Rat Terrier mix.