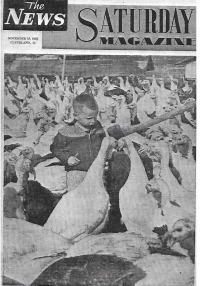 This picture appeared on the cover of The News Saturday Magazine in 1955.

For Thanksgiving, here are two turkey tales about our town.

Their son, Roger Powell, raised turkeys. They were “free range” turkeys, meaning they roamed around the farm and were not cooped. Powell’s turkeys were very popular. Most Bay Villagers purchased a fresh Powell turkey at Thanksgiving and Christmas in the 1940s and '50s. When the Powell farm was sold, everyone was sad. Where were they going to get their turkey?

I remember the family informing us that the Albright turkey sold at Carr’s Market in Avon Lake was a Powell turkey. I ordered my turkey from Carr’s for many years. I still have directions on how to cook a fresh Albright turkey. When the farm was sold, the land became a development of houses. Clinton Drive and Perry Drive are two of the streets in that development.

The southwest corner of Wolf and Bassett roads passed from the Bassetts to the Aldrichs to Frank Meilander. Frank raised turkeys, grew vegetables, and had a fruit tree orchard. The Januska family lived on Foote Road.

Les Januska, still in high school in the late 1930s, worked a trap line along Porter Creek that ran behind Westerly School, under Bassett Road, along Wolf Road, through Huntington Park to Lake Erie. He trapped muskrat. Every morning before school, Les checked his traps.

One morning before Thanksgiving, while checking the traps, he noticed a car sitting in one of the Meilander farm fields. That was strange, and the car was not familiar. Seeing no one around it, he didn’t think much more about it and headed off to school. Later that same day, Chief of Police John Eaton called the frightened Les out of class to ask him about the car. It seems that Les and his flashlight had interrupted turkey rustlers who ran off. The Meilanders had found the car that morning with its rear seat removed and the back filled with turkeys with their legs bound. The holiday dinners had been saved.

Les grew up, went off to war, returned and became one of Bay Village’s most respected firemen. Westerly School is located on Meilander property.

Correction: In the previous issue, contained incorrect information about the Starke family. The back part of the Henry Winsor house, which was not moved north up Bradley Road with the rest of his house, is part of the August Meilander house and not the Starke house.