Does Westlake have a plank road toll house? 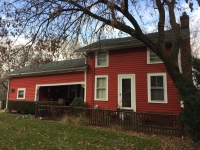 A possible plank road toll house at 23046 Detroit Road in Westlake. Photo by Will Krause

Passing by the Plank Road Tavern at 16719 Detroit Ave. in Lakewood, you might wonder about the unusual name but you certainly wouldn’t connect its name with today’s city of Westlake in any way. But these two places on our changing earth are connected. They are connected, of course, today by Detroit Avenue which extends westward from Lakewood into Rocky River and Westlake (becoming Detroit Road when it crosses the bridge over the Rocky River). The cities also once were connected by a road made of planks of wood which followed this right-of-way. This was during an era when Westlake was known as Dover Township and today’s Detroit Road was known as North Ridge Road in Dover Township.

The Plank Road Tavern prides itself on Midwestern craft beers and contemporary rustic fare. That is a description not too different from the refreshments offered by the taverns that had sprung up along the plank road to serve the Dover and Rockport farmers returning home after a day at the market.

Our interest in the plank road all started with stories that the little red clapboard Westlake home at 23046 Detroit Road, just west of the Rocky River border, was once a toll house. The unusual tiny house includes a side porch which would be a perfect place for a toll taker to collect tolls from travelers. This house resembles at least one drawing we have seen of a toll house from that era.

However, when the house was listed in the Ohio Historic Inventory in 1977, the then-owner speculated that the two-story block originally may have been a horse barn built circa 1824 as part of a brick yard operated on the property by a man named Farr. The name “Isaac Asplin” appears in the 1874 Atlas of Cuyahoga County. He had nearly 50 acres and the atlas shows a brick yard on his property behind the house. The porch and western part of the house could have been added later.

The same inventory form states that tax record research conducted by the Westlake Historical Society indicated that the house was built circa 1844. We were unable to locate the research but going back to the original tax records we see jumps in value in 1847 and 1854 which may indicate construction of a home or an addition. 1824 tax records are not available.

According to “Rocky River Yesterday” by the Rocky River Historical Society, in 1850 the Ohio Legislature authorized Cuyahoga County to extend a $6,000 loan to the Rockport Plank Road Company to build a wooden decked bridge over the Rocky River, so 1854 would make sense for a porch addition to collect tolls.

The same 1874 Cuyahoga County atlas mentioned above shows a toll house clearly labelled behind the area where the Spanish Revival Westlake condominiums now stand, but no toll house on the Asplin property. There is an existing circa 1865 photo showing a portion of this toll house. It resembles the other known plank road toll house which still exists at 1325 Cook Avenue in Lakewood, neither of which look like 23046 Detroit Road.

“The Lakewood Story” accessed online a few years ago states that the home on Cook used to be located at Warren and Detroit roads when it was a toll house; that the plank road extended from West 25th Street to five miles beyond Rocky River, and that the first toll house was located at West 65th Street, later moved to about 100th Street, then West 117th Street, and finally to Warren Road. There was another toll gate at the Rocky River and additional toll was charged for crossing over the bridge.

Does anyone have hard evidence that this was a toll house? Please contact me with information at wrk295@aol.com.

William R. Krause, AICP I am the Assistant Planning Director for the City of Westlake. I have worked for Westlake for 28 years. I served on the Bay Village Planning Commission for 5 years. I was a member of the Reuben Osborn Learning Center Steering Committee. I am a Board Member and Historian for the Westlake Historical Society and a Trustee of the Western Reserve Architectural Historians. I have been married to Debra for 35 years and am the father of three grown children, grandfather of two and owner of two Shih Tzu's.