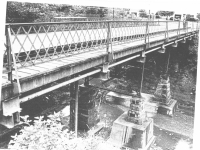 The 1854 Oviatt bridge across Cahoon Creek. Notice the Oviatt outbuildings in the background.

In 1973, my sister, Gay Menning, and I decided Bay Village needed a written history and began work on "Bay Village: A Way of Life." To write a story about the early settlers that everyone would enjoy, we needed to find lots of little tidbits of everyday life along with the begets and begats.

George Drake, our neighbor, lived on the corner of Bradley and Lake roads. We lived at 31011 Lake Road and stood at his corner, Stop #35, every school day to catch the school bus. George’s great-grandparents were Aaron and Elizabeth Winsor Aldrich.

We knocked on George’s door and asked for help. George’s family kept every piece of paper that ever came into the house between 1830 and 1920 in a Rhode Island desk in a back room, and we told him we would sort his contents if we could look at them. What follows are some of the stories we gathered from the pieces of paper in George’s desk.

By 1826 the township of Dover had five school districts and 70 households. Nathan Bassett distributed the school bill in 1832 among Amos Cahoon, Elizabeth Johnson, William Saddler, Aaron Aldrich, Ranson Foote, Benjamin Stephens, Mr. Snider (the only one we don’t know), Joseph Cahoon, and himself.

Among the farmers who settled during this period in North Dover were Thomas Powell (on Bradley) and Caleb Eddy (on the east side of Bassett), Josiah Hurst (Harriett Bassett married Josiah Hurst and they purchased the land next to Bassett Road from Nathan Bassett’s heirs), Charles Hassler on the old Asahel Porter property (Lot #94, along the lake). Nelson Oviatt built a home and farmed in the valley while operating his mills between Cahoon and Dover Center roads. C. Camp, Loyal Humphrey, James Moor, and Calvin Giddings were farming the shoreline east of Dover Center, while Joseph and Mary Winsor Brown had the last lakeshore farmstead in the eastern township. Our first farmers were engaged in agriculture and fishing; Cahoons, Osborns and Saddlers among them.

Beginning in 1830, Aaron Aldrich, Sheldon and Reuben Osborn, and Ranson Foote were elected county constables, while Aaron Aldrich was Justice of the Peace. History tells us the north shoreline settlers paid their bills more readily than the southern township settlers, although we see a judgment against Amos Cahoon in 1836 for $4.70. It seems the settlers gave IOU’s to their neighbors, and then were not able to pay them. Aaron Aldrich as Justice of the Peace had to send the constables with judgment papers to collect. There are so many papers in our possession, one wonders when these men had time to farm.

In 1833, Aaron collected $69.31 in judgment notes against well-known settlers. In April 1834, William Burlingame of Avon brought judgment against the owners of a sloop named Laura Judson for back wages. William Sadler put up the bail money of $50 which he later had to pay because the judgment was not collected. David Ranney went to jail because he could not pay $5.50, but Ranson Foote bailed him out at $5.00.

In 1830, Walker Road was not open yet, much of the travel was done along Lake Road to Bradley Road or Clague Road, then south to North Ridge (Detroit) or Center Ridge. By 1852, our farmers were prospering and major roads were carrying the names of Bradley, Bassett, Cahoon, Hall (Columbia), and Clague. At the time, Dover Center did not run north of North Ridge (Detroit) and everyone traveled up Cahoon Road to the lake.

In 1838, Chris Sadler was selling land in Michigan while Betsy Aldrich was buying salt, iron goods, loaves of sugar, brandy, cod fish, crackers, tea, calico and eggs for $3.23. Glass for windows and iron for the wagon came from Moore & Company on Superior Street and Union Lane in Cleveland.

A meeting was held in 1844 for the purpose of building a regional Baptist Church of Christ at Justice Stocking’s corner, the southeast corner of North Ridge and Dover. The following men gave work time or money: Hurst gave sheep; Jesse Lilly, stone; Austin Lilly, shingles; C. Saddler, work with a team; Nelson Oviatt, lumber; Thomas Powell, 2,000 feet of sawing; E Smith, nails; L Porter and H Cozzens, stone; and Walter Petre and Mr. Bates, painting. Nelson Oviatt was paid $90 to build it. The building committee read as Aldrich, Clemmons, Cahoon, Atwell, Crocker, Walker, Foote, and Farr. (There were many Baptists in Dover Township.) An agreement was written between John Lindemeir and H Henke, trustees of the Lutheran Church, and Henry Aldrich and Carlos Atwell to lease the Baptist Church to the Lutherans if they put three good coats of paint on it by July 1859.

Aaron Aldrich, Selden Osborn and Joel Cahoon were appointed a committee in 1854 to build the new Oviatt Road bridge across Cahoon Creek to replace the old wooden bridge.

It is fun to go back and see what our early settlers were doing in their day-to-day lives. They not only worked hard in their fields and worshiped on Sunday, but readily accepted civic positions and performed their duties. Look at how many families we named streets after. Thank you, George, for keeping our Dover history. This is just a little of what is contained in our book which can be found at the Bay Village Library or Rose Hill Museum.