When the Downtown Heinen's was a bank: The story of 2 dads 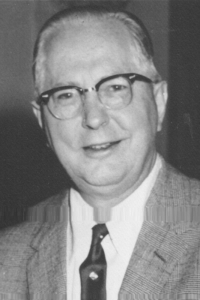 Bay Village Councilman Dave Tadych and I discovered we have something in common. Each of our fathers spent more than 40 years with one company – and it was the same company and our dads knew each other. This is the story of two dedicated guys making a living for their families.

Going through some old pictures for a picture book I was making, I came across a photo of my mother at a bank function with two men I couldn’t identify. I sent the picture along with some others from the Cleveland Trust Bank to a friend who used to work for my Dad and asked him if he could tell me who the people were in the pictures. When I got his answer back he said one of the men was Bernie Tadych. I thought, hmm, wonder if that is David Tadych’s father. When I next saw Dave I asked him if Bernie Tadych was his father. He said yes and we realized our dads had worked together at the Cleveland Trust Company for years. We had a connection. Both our fathers spent their careers there.

The next time I saw Dave he handed me a little white box, three inches square, that looked the worse for wear. I opened it and the pamphlet inside read, “This symbolic paperweight of jet mist granite commemorates the opening of our first Twin Towers.” The new logo, CT for the Cleveland Trust Company, was in the middle. I loved it. What a memory for me since my dad had so much to do with that building, known as the Cleveland Trust Tower. Everyone called it “your dad’s building.” So here is the story of David’s dad and my dad and how they climbed the ladder at the Cleveland Trust Company.

To begin with, back then, the whole bank was a “family.” They had a group called the Official Family and our dads belonged. The annual picnic each year was at Euclid Beach Park. Back then men often spent their whole lives with one company, becoming very loyal. Together they had over 80 years of banking connected with the Cleveland Trust Company. Both of our dads taught fundamentals of banking for the American Institute of Banking. We would walk into a branch lobby and a teller would recognize the name and ask, “Did your dad teach at AIB?”

Bernard Tadych graduated from West Tech High School and attended Cleveland College. Bernie always had a smile on his face and a kind word for everyone. In 1930, he began work at the Cleveland Trust Company Bank as a messenger, rising through the various positions to chief clerk at the Terminal office. He was appointed assistant manager of the Terminal Prospect Branch and then vice president and manager of the branch, a position he held for many years. In 1974, Bernie played a major part in the merging of three separate and independent banks into the CleveTrust Corporation, a bank holding company, Cleveland Trust Company being one of them. Bernie was named to head the proposed new bank in Lorain County. He was appointed senior vice president and chief executive officer of the First Lorain Trust in 1974. He still held this position when he retired. Bernie lived to be more than 100 years old.

My dad, J. Ross Rothaermel, attended East Tech High School and played on the football team. His father died, and to help the family he quit school and went to work. Ross was the auditor of the Midland Bank at Public Square when Black Friday and the Great Depression hit. He was never out of work, but life became harder. Eventually, the Midland Bank was purchased by the Gund family and the employees became part of the Cleveland Trust Company at East 9th Street and Euclid Avenue. Dad started over as a comptroller sitting on the main floor of the rotunda with a window looking out at East 9th Street (where Heinen's is today).

In 1950, Dad became the auditor of the Cleveland Trust Company. When computers became of age, Dad was made a vice president and put in charge of the new EDP department. Working with IBM, new computers took over and Dad’s traveling audit crew became his computer boys. The bank needed more space, and two new banking towers were planned for Euclid Avenue. All the employees that worked in the current buildings on Euclid had to be moved for three years, and Dad was the guy to do it. They called it Strategic Planning.

Buildings were rented on East 9th Street and the people moved while Tower No. 1 went up. In 1968, Dad retired but was rehired the next day to finish the job. He worked on and off for the next two years helping organize the departments for the new building. I still have a Turner Construction hard hat. The tower was completed in 1971; a second "twin tower" was never built. The Cleveland Trust Tower was later renamed Ameritrust Tower and is now part of "The 9" residential and commercial complex.

David and I discovered we had much in common being Cleveland Trust brats.