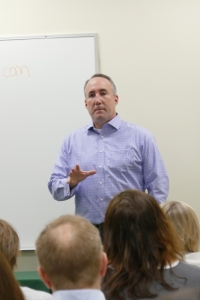 Sixty constituents made up a standing-room-only crowd at Ohio District 16 Representative Dave Greenspan's first "Donuts with Dave" town hall meeting in Westlake Porter Public Library on Feb. 25. In a 2.5-hour marathon, Greenspan fielded tough questions on a wide range of issues, from gerrymandering to reproductive rights, Lake Erie water quality to safety for ethnic and religious minorities, and human trafficking to gun control. The state budget was also a hot topic, in particular provisions that affect schools.

Greenspan outlined several measures he will use to gather constituent input as he settles into his new job. He expects to hold Donuts with Dave sessions every other month on Saturdays, with the next one scheduled for April 29, 10-12:30 at the Fairview Park Library. In addition, roundtables will feature issues before each of the 22 Ohio House standing committees. The first roundtable, on March 6, focused on the opiate crisis.

Newly elected Ohio District 24 Senator Matt Dolan stopped by for an hour to answer constituents' questions. He has been attending a variety of events in the 24th District, but he has not yet held his own events for the general public. Dolan does expect to hold a town hall to gather constituent input before he votes on the new two-year budget, which is expected to pass the House in late April and must be approved by the entire legislature before July 1. He too has a newsletter and encouraged constituents to contact him through his Senate website, ohiosenate.gov/dolan.