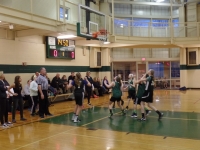 March Madness invaded the Westlake Recreation Center! Thursday, March 23, and Saturday, March 25, saw over 100 teams in grades 3-8 participate in the annual basketball event. Teams from all over the area came to showcase their talents on the hardwood court.

On Thursday night, 38 girls teams with names such as the Hot Shots, Beastly Ballers, Ninja Ballers and Storm Squad caught the March Madness Fever. The winners of the girls division were: Crazy Cavs (grades 3/4), 4K (grades 5/6), and The Older 4K (grades 7/8).

Over 60 boys teams stormed the hardwood on Saturday. Teams like The Lane, C-Town Swish and Shamrock Shake started things off for the third and fourth grade boys at 8:30 a.m. Other teams like Legit Ballers, West Side Savages and Dunkin Demons followed suit. The winners of the daylong boys tournament were: Just Ballers (grades 3/4), Dunkin Demons (grades 5/6), and the Swat Team (grades 7/8).

The winning girls and boys teams walked away with T-shirts and bragging rights for the year.

The tournament is open to any and all players from around the area. Each roster may have up to four players on it with three playing at a time. Each game is played to 15 points or a 15-minute time limit. At any given time there are as many as eight games going on at once inside the Westlake Recreation Center’s gym. Each year the tournament tries to play as close to St. Patrick’s Day as possible, so mark down that date and start thinking up those cool team names!