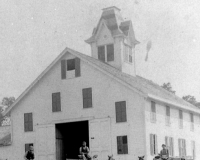 The Cahoon family barn was built in 1882, and was renovated in 1936 to become the Community House.

The Community House started life in 1882 as the Cahoon barn located in today’s Cahoon Memorial Park. Since 1810, when the Cahoon family arrived in Dover Township, the family had made do with a cluster of outbuildings just south of the house for farm equipment and animals.

In 1882, while Joel Cahoon was still living, the family decided to build a new barn. Some of the outbuildings were removed and a barn built in the same location. The new bank barn was Gothic style and three stories high. Bank barns, built on a rise, used the lay of the land to create a lower level and entrance on one side. The lower level, seen from the south, contained wagons and equipment. The first floor with, doors that opened to the north, held stalls for animals. The third floor was the hay loft. There were windows on all sides, and on top was a cupola which allowed the flow of air.

Today, the Cahoon barn retains its basic form, proportions, and structural features of the 1882 Gothic barn. It sits on a foundation of sandstone. The wood post-and-beam system remains from the old barn with steel columns and trusses added for reinforcement. The exterior of colonial revival clapboard siding and windows we see today were installed during the 1936 renovation into the Community House by the Works Progress Administration (WPA). The first floor was turned into a meeting room with knotty pine paneling, popular at the time. The attached outbuildings became the kitchen, bathroom facilities and another room. The barn became the village community center. It was named the Community House.

When the Community House was opened in 1936, the first reception held in the meeting room displayed a replica of a log cabin, with ancestors of early settlers, in costume, portraying the beginnings of Dover Township. Over the years, village organizations held their monthly meetings, dinners, teas and special occasions there. At public civic meetings important decisions were made to plan the future of our community.

On the Fourth of July, the meeting room became a Bingo parlor and dance hall in the evening. The high school used it on Friday nights for school dances organized by the Recreation Department and the “Snow Ball” was held there. The kitchen was in great use with many dinners served for community organizations. Many a bride had her wedding reception there. It was and still is the main meeting room in the village. The basement and back rooms have housed the police and fire departments, Mrs. Korney's ballet studio, and the Friendship Center to name a few. The basement is now home to the Village Bicycle Cooperative.

This year the Community House is 81 years old. Over the years, the meeting room has seen small changes. The Women’s Club provided new draperies, and watercolor paintings by village residents hung on the wall. The city modernized the kitchen many years ago. However, just like in our homes, the Community House needs repairs made through the years. Today, the building is in great need of structural reinforcement, a new kitchen and updating.

There is a story in "Bay Village: A Way Of Life" about early settlers coming together to build a Baptist church in the township. Soon-to-be members of the new church offered time, money or supplies to get the job done, and the church was built.

All Bay Villagers could donate time, talent or money to keep our community house safe and beautiful for the next 80 years. A benefit to kick-off the restoration/renovation of the Community House and historic area will be held on Saturday, April 29, at 6:00 p.m. at the Lakewood Country Club. "Back to Bay's Future" will be a 1960s themed dinner and dance. Tickets are $100 each. For more information, contact: blinglady17@gmail.com or mrthomas1970@gmail.com.