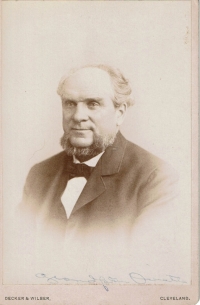 As sometimes happens after I write a story, a relation from the story finds me and we are able to exchange information and pictures. This is how it was with the Oviatt family article when an Oviatt relative from Chagrin Falls sent me an email with pictures of Dudley and Almira in their latter years and four of their five children – Clarence, Arthur, May and Lillian (Rena is not pictured).

I was also able to find some of the deeds to the Dover Township property. However, I have not found the original deed for family patriarch Nelson Oviatt that says whom he purchased from in 1825. To finish the story, I offer the following information.

Luther Oviatt, Dudley’s brother, who traveled with his parents to Ohio in 1821, stayed on the east side and attended Western Reserve College of Hudson where he graduated with honors in 1857. He went directly into the public school system of Cleveland serving as teacher, principal, and superintendent of instruction. Along the way two of his students were John D. Rockefeller and Laura Spelman, who in time would become Mrs. Rockefeller. Luther served as the first librarian of the Cleveland Public Library from 1869 to 1875.

When Dudley and Almira's son Clarence retired, he went to live with his brother, Arthur’s, son, Douglas George Oviatt, mayor of South Euclid. In 1938, while crossing a street in East Cleveland, he was struck by an automobile and killed. His obituary in The Plain Dealer read, “Clarence M., brother of Arthur, was the operator of a lumber concern here until 1910, when he joined a Memphis company dealing in timber. He returned in 1916 and looked after his properties after that time.”

Clarence is buried in Riverside Cemetery in Cleveland. Almira Phinney, Dudley’s wife, was born in Avon. Her father, Benjamin Phinney, married Lucretta Thompson, possibly of the family that owned Thompson’s store on Bassett Road. The A.C. Phinneys lived on the east end of Lake Road (Washington Lawrence purchased this property) and then Bassett Road on the old Caleb Eddy farm. The Phinneys sold their farm to Joseph Waldeck. Dudley and Almira’s daughter, Lillian, married Hoyt Verner Bright, born in Dover in 1863. He was the son of Laura Foote and Alfred Goodwin Bright. Laura was the daughter of  Ransom and Catherine Porter Foote. This family moved to California. The Oviatt name left the village.