The history of Detroit Road, Part IV: Straightening the curve 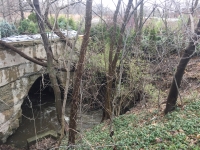 The old Detroit Road bridge over Cahoon Creek, just east of Cahoon Road as seen from the Detroit Road sidewalk. Photo by Will Krause

According to "The Lakewood Story" by Margaret Manor Butler, the last mayor of the hamlet of Lakewood, J.J. Rowe, when discussing his administration which was in place from 1902 to 1905, listed as his first accomplishments: “We abolished the old plank road on Detroit, that was laid before the Civil War … [and] abolished the tollgate at Warren Road and Detroit Avenue.”

Hadsell and Rutherford’s "History and Civics of Dover Village" states that Detroit Road in Dover (Westlake) was first paved with brick in 1908. There is a little patch of brick paving still visible if you know where to look for it.

Part II of this series focused on the bridges which historically carried the Detroit Road over the Rocky River. It concluded with how the old downtown area of Rocky River was saved by introducing a sweeping curve in Detroit Road around it. Evidence of another relocation of Detroit Road can be found in Westlake just east of the intersection of Cahoon and Detroit roads. What is now an exit drive and area to display nursery stock in Cahoon Nursery was once the bridge that carried Detroit Road over Cahoon Creek. The brick surface is still visible on the bridge.

Dover Village meeting minutes include a reference to the proposed straightening of Detroit Road in 1914. It is not clear exactly when the road was straightened but it was many years ago! If you want to see a little bit of Westlake history and support a locally owned business this spring you can check out the bridge while purchasing some posies for your yard.