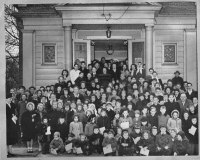 The Presbyterian Sunday School, pictured on the front steps of the church in 1949.

The following information about the Methodist and Presbyterian churches in Bay Village comes from papers in the Bay United Methodist Church archives written by Bert Lewis and Edward Tuttle.

In the beginning: a one-church town

In the early years of the 19th and 20th centuries, Bay Village contained but one church, the Dover Lake Shore Methodist Episcopal Church, occupying its present location at Lake and Bassett roads near the west end of town. Congregants worshiped in a one-room white clapboard building constructed in 1841. Services were usually presided over by a circuit-riding minister. Residents of Avon, Avon Lake and Bay Village, east and west of Dover Center Road, attended. The Rev. Henry B. Sehnert became the resident pastor around 1905.

Lake Road, then an unpaved country thoroughfare, was very muddy in wet weather and so dry and dusty at other times that a gray pall of dust hung over it, settling down upon the trees and foliage that graced its sides and the houses that lined it. (When Ida Cahoon passed away in November 1917, Lake Road was so muddy that her funeral procession needed to travel on Cahoon to Osborn and then Bassett roads to get to the church.) The Lake Shore Electric Railway, some 500 feet to the south, offered regular car service, but an increase in fares at Dover Center necessitated a double fare between the east and west ends of the town to ride to church, separated by the Huntington and the Cahoon farms.

At the end of Rev. Sehnert’s pastorate, residents of the east part of Bay pointed out the inconveniences of having to travel the long distance to the Methodist Church on the west side of the village. The Cahoon sisters offered to donate suitable land on Dover Center Road, if a church were built on it. However, church members living in Avon and Avon Lake objected, stating that was too far for them to go; and then there was the stipulation in the agreement with the Sadler family that the property at Lake and Bassett remain church grounds.

So, in 1912, Ida Cahoon, president of the Bay Board of Education and a prominent member of the Methodist Church, arranged for the Rev. Endley to hold a religious service in the little Red Brick School house at Lake and Columbia roads for the benefit of the east end Bay residents. He was accompanied by John B. Rumbaugh, superintendent of the Methodist Sunday School.

Twenty-five people attended. Given the choice of hearing a sermon or having a Sunday School service, those present favored the latter. A free-will offering netted a sufficient sum to warrant organization of a Sunday School at once.

A Sunday School is established

Election of officers took place and Miss Louise Stampfli and Miss Marval Davis were elected. Edward Tuttle became superintendent of the Sunday School. Dr. Endley promised to help and  rendered his services during those early years. East end families attending Sunday School were: Cowley, Davis, Fisher, Klumph, Malone, Scholl, Stampfli, Tetterbush and Walz. This was during the winter of 1912-13 and each Sabbath at the appointed hour, 10 to 20 usually congregated.

Throughout the summer the services continued, usually in the afternoon. If there was no organist, Ed Tuttle tells us, they managed without the instrument. It was decided if five or six came, the schoolhouse would be open and a service held. The Sunday School services continued, surviving a small pox epidemic which closed schools and churches for a period.  The Rev. Endley and Mr. Rumbaugh stayed with the new mission until it was firmly established.

By 1915, the Sunday School seemed to be a permanent institution in the east end of the village. Services were held every Sunday afternoon and the children and young people were attending.  With the increase of pupils, more teaching forces were needed. A request for one or two teachers was first made to the Methodist Church friends, but they were unable to supply teachers permanently. The matter was taken up with the County Sunday School Association. Miss Bernice Morningstar from the Lakewood Presbyterian Church came to help, and when she left for college they sent Mrs. Henrietta Ellis, who became the permanent teacher.

Affiliation with the Presbyterian Church

On Sunday evening, March 25, 1917, the Reverends Williamson, Ruf and Zorbaugh met with the members of the east end Sunday School for the purpose of organizing a new church. The following persons were received by letter from other churches: Davis, Figgie, Hublitz, McAuley and Tuttle. The following persons were received upon confession: Byrne, Davis, Figgie, McAuley, Sproul, Stampfli, Tuttle and Wierman. Elected and ordained as elders were Homer Davis, David McAuley, Edward Tuttle and Jacob Wierman.

On May 6 of the same year, after Sunday School hour, moderated by Dr. Tombaugh, the following four persons, two McAuleys and Mr. and Mrs. Rudd, were received into membership of the new church upon confession of faith. Enrolled together with the 19 faithful members received on March 25 as charter members, the number totaled 23.

Early setbacks did not detour the staunch desire to worship in the east end of the Village. For a while the Red Brick School house was lost to the Sunday School and they met in Edward Tuttle’s cottage across the street from the present church. When they got the school house back, a crack appeared in the west wall, the building was condemned and they had to move again, meeting in each others' houses.

Finally, in 1923 the property was put up for sale; the church outbid everyone else and secured the property. A new church was planned and the building was renovated. In 1932 it caught fire and all but the exterior walls burned down. None of these catastrophes stopped the desire to worship at this site and rebuilding began again.

In 1954, the original church building was razed to make room for a new sanctuary and Christian education building. A number of renovations and additions have followed over the years. Today this church is one of the most prominent churches in Bay Village.

Congratulations to Bay Presbyterian Church on your 100 years of continuing to offer faith and worship to the citizens of Bay and its surrounding communities.