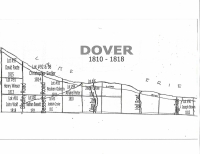 This maps shows the lots of the earliest settlers in North Dover Township.

Unfortunately, the oldest map the Bay Village Historical Society owns dates from 1852. Before 1852, we can only know our early settlers from family stories and deeds which detail the land and list names of buyer and seller.

As an example: Caleb Eddy, an early settler, purchased 140 acres in Lot #83 from James Bryan in 1827. We know from his deed that James Bryan purchased 160 acres of land in Lot #83 from Jedediah Crocker. To go back even further, we find the deed between Jedediah Crocker of Euclid Township and Hubbard and Stow of Middletown, Connecticut, that shows Jedediah purchased Lot #83 along with 13 other township lots totaling 1,950 acres in 1812. These lands were surveyed by Joseph Darrow, who must have lived in the township since so many deeds list Joseph as the surveyor.

Philo Taylor was a land agent for Hubbard and Stow in Dover Township. From what we can tell, he and his wife, Zervah, lived on land around where Longbeach Parkway and the high school are today. He was here for more than 10 years selling lands to our early settlers. His name appears on many deeds.

The Joseph Cahoon family, from Vergennes, Vermont, Lot #95, arrived on the morning of Oct. 10, 1810, at the mouth of Cahoon Creek. The same afternoon, west of the Cahoons, the Porter family, on Lot #94, and Reuben Osborn, Lot #93, from Woodbridge, Connecticut, arrived with Leverett Johnson.

The above families were no more than 1,000 feet from each other. They would have heard the banging and cutting of trees, seen smoke and surely gone to see what it was about. Abigail Cahoon and Leverett Johnson met in the woods while picking berries. They married in 1814 and moved to what is now Westlake, on land near the intersection of Center Ridge and Porter roads.

In 1811, Patty Hall and Nathan Bassett, from Berkshire County, Massachusetts, along with her brothers,  Barnabas and James Hall, came into the township. Patty and Nathan settled on Porter Creek between Bassett and Bradley roads. Later her sister, Nancy Ingersoll, would join her brothers on Hall Road.

Henry Winsor, Lot #91, and his sister, Mary Brown, Lot #90, from Smithfield, Rhode Island, entered the township in 1813. Henry and Mary were siblings of Betsy Winsor Aldrich, who arrived in south Dover in 1816. Mary married Joseph Brown and settled on the lake near the east end of Lake Road near the Rocky River border while Henry lived on Bradley Road.

Christopher and Sophia Sadler along with his son, William and his wife, Elizabeth, and their families, from Clarence Station, New York, settled on Lot #92 and Lot #98 in 1814. Their land was along Lake Road, and Bassett Road ran through it.

In 1815, David and Betsy Foote, from Wethersfield, Connecticut, arrived to take over Lot #97 from an early settler whose daughter had been kidnapped by Indians. The farm was west of Bradley Road and ran along the lake shore to the Avon country line.

John Wolf moved his family to Dover Township from Virginia in 1818. He built a log cabin on 112 acres just south of where Wolf and Bradley roads meet today.

I notice that the deed date does not always agree with the date the early settler arrived in the township. I think payments were made and no deed was registered with the Cuyahoga County Land Office until paid in full.

So, here are our first families in North Dover Township. Most didn’t live but a half mile from each other along the lake shore. They were certainly not alone. As one reads about these families, it is learned that most had other family in the area. All built log cabins as their first home. Although they could easily walk to visit each other or come when needed for sickness or to build a grist mill, there was enough hard work on their own hundred-acre farm to keep them home.

These settlers stayed and made a new way of life in North Dover Township.