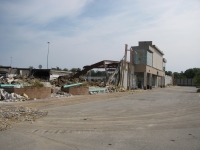 Looking from the construction fence-line on the west side of the building, this is the old Kmart store in the process of being demolished on Aug. 27. The front wall was torn down up to the store's main entrance. Interestingly, the initial focus on demolition had been taking down the building's roof and interior structure while leaving the outer walls standing, for the most part. Photo by Dan Hirschfeld

Seemingly reflecting the times, the shell of a formerly popular and important retail establishment in Westlake is in the process of being demolished as this is written.

In the first of a multi-phase modernization and redevelopment of the West Bay Plaza by owner DDR Corp., the large vacant building capping the north end of the shopping complex, which housed a Kmart store two separate times, is coming down (or has come down). The space created will then find a Sierra Trading Post and Fresh Thyme occupying it. Reportedly, at a time in the future, a second phase of the plaza’s redevelopment will focus on updating the western row of retail spaces. It’s also been reported the plaza's newer eastern row of shops will be made-over, but during which remain open and intact.

The building being razed was originally constructed as a Kmart store. From researching the Plain Dealer’s newspaper archives it was reported that in April 1972 Westlake City Council approved construction of a 120,000-square-foot Kmart store on the northwest corner of Detroit and Crocker roads. It appears a grand opening of the Kmart store was celebrated sometime around October 1974.

Shortly after Kmart's 2004 merging with Sears, plans were announced to convert Westlake’s original Kmart to what had been described as a Kmart-Sears store hybrid, calling it Sears Grand. The Plain Dealer reported Westlake’s brand new Sears Grand was to open on Nov. 18, 2006.

The rebranded Sears Grand store didn’t enjoy nearly the same longevity of the original Kmart, closing and reportedly reopening once again as a Kmart in February 2012. Unfortunately the Westlake Kmart’s second incarnation didn’t survive very long, being shut down for good in April 2014.

The original Kmart housed an impressive variety and quantity of items, from shoes and clothing and housewares to the stuff which I found most interesting, such as hardware, tools, paint and building materials, home and automotive electronics and general automotive supplies. The store also dealt with gardening and landscaping supplies as well as marketing a variety of plant stock in season, not to mention the tire and auto repair facility there.

From my perspective, neither the Sears Grand nor second Kmart version had the quantity or variety of technically related stock, nor were as useful in general, as Westlake’s original Kmart iteration.

While this story has focused on the fate of the old Kmart store, apparently initially treated as a stand-alone project, the building obviously ended up being incorporated into a larger shopping plaza. In September 1973 the Plain Dealer reported Westlake Planning Commission approval of plans for a Kmart Plaza shopping center to be built at the northwest corner of Detroit and Crocker roads. Among the early tenants of the shopping strip on the west side of the plaza, a Rego’s grocery store, a Revco drug store and Radio Shack were included.