The history of Dover Bay Park in eastern Bay Village 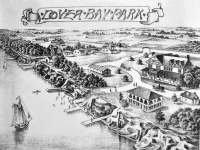 An artist's rendering of Dover Bay Park shows the large clubhouse, pavilion and cottages along the east drive.

Dover Bay Park or Dover Bay Colony, what’s in a name? Historical newspaper articles identified this area both ways. One article talked about the organization of "the colony" in Dover Bay Park. Another said a "summer colony" sprang up around the Dover Township park. The residents may have considered themselves a colony. For 20 years in the late 1800s, Dover Bay Park was the place to be.

In 1813, after the Indians departed, the Brown family settled on Lot #90 in Dover Township, the easternmost plot of land along the lakeshore. The Brown boys grew big and tall and some said this could only be accounted for by their healthy location on the banks of Lake Erie. Mary Gant and the Phinneys would become their neighbors in Lot #90.

Washington Lawrence had been keeping a summer home in the Dover Bay area for some years. Lawrence, president of the National Carbon Company, purchased the three farms, with four farm houses, making up all of Lot #90, 125 acres, in 1880. His land was just west of the Rockport Township line on Lake Road.

With the new purchase, the family moved into the Phinney farm house while their new wood-frame summer house was constructed. Lawrence made improvements in the grounds, laying out a plan of walks and roads in a park-like setting on 33 acres. Now, out in the country, a nucleus of beautiful summer cottages appeared on the park grounds built by prominent citizens of Cleveland who took up their summer residence there.

Let’s visit the park. After passing through Rockport, the Nickel Plate Railroad arrived at Dover Bay Park, which had a station on the grounds. The site of the park rose from 10 to 50 feet above the beach. Sperry Creek broke the bank, making an easy descent down the ravine to the piers at its mouth where boats were waiting for fishing, rowing and sailing.

The clear waters of the creek flowed through the park between bluffs thickly wooded, offering a quiet and shady retreat for those in search of rest. The beach was sandy and free from stones, with a gradual slope under the water.

Pure water was obtained by filtering water from the lake through the sand and gravel of the beach into a reservoir constructed under the bluff. From this reservoir water was raised by a windmill and force pumped, having a capacity of one barrel a minute, to an elevated tank on the highest point on the bluff, hence to be distributed to the cottages through a system of pipes.

There was a telephone connection with the city and a barber shop. A large stable held 60 horses. There was a clubhouse and a dining hall with an experienced caterer in charge. A pavilion had a fireplace and sliding glass windows. Dances and large gatherings were held on the second floor. A bath house offered hot and cold baths, sun baths, and sulphur baths under a glass roof. Across the street was a nine-hole golf course. The daily presence of the Humiston herb doctors, next door, was a comfort. The residents of Dover Bay Park certainly had all the comforts of home.

With Washington Lawrence’s death in 1900, the park changed. The golf course and clubhouse reorganized into the Dover Bay Country Club in 1903. The cottages began to disappear as the prominent citizens of Cleveland found new summer homes. The clubhouse was torn down in 1951 and the land divided into lots. The golf course operated until 1956.

Today, all that is left of Dover Bay Park are three cottages: the relocated and remodeled Fuller House in Huntington Reservation, the Hughes Cottage west of Clague Road on Lake Road, and the Dodge Cottage east of Forestview Road on Wolf Road.