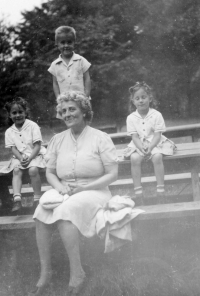 Marie Ranney was the kindergarten teacher. She is pictured here with Lanny Holiday and Gay and Kay Rothaermel, kindergarten pupils.

Bay was still a rural community back then with a small citizenry. There were only so many children 5 years old to start kindergarten. The board of education decided to look at families with children still 4 years old but would turn 5 during the school year. If their birthday was in January or February, the family was contacted regarding sending their child to school for kindergarten.

My twin sister, Gay, and I had a February birthday. Five other children who had January and February birthdays joined us. Including the seven of us, Bay had enough children to start the first kindergarten class in the fall of 1941. Of the seven of us, four completed school together and graduated in 1955. The four were Sue Hook, Dick Werner, and Gay and Kay Rothaermel.  The other three left the area.

We joined the class of 1954 on the first floor, Room 101, at Parkview School for kindergarten. At Halloween the class, along with some brothers and sisters, dressed up to have their picture taken for a party. We, the east and west enders, rode the school bus. High school students rode the bus with us to take care of us. Billy Brueggemann Crook was on my bus.

The next year we all moved on to the first grade, the east enders going to Forestview and the west enders staying at Parkview. This went on for two years for the seven of us who had joined the class so there would be enough children to start a kindergarten. Our classroom in the second grade was in a portable on the west end of Parkview High School. It was decided that year that we should stay back a year with children our age. We all repeated second grade. Mrs. Swaim was our teacher both years.