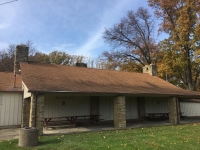 Thanks to the passage of Westlake's Issue 53, Clague Cabin will be restored to an open pavilion as it was when built in the 1930s. Photo by William Krause

Second in a series of articles on Clague Memorial Park.

Two weeks ago, Issue 53, a 25-year extension of an existing one-eighth of 1 percent income tax to fund recreational facilities, passed by a 2-to-1 margin. The extension will pay for $34.5 million in new and renovated recreational amenities throughout the existing city of Westlake park system. Included in these amenities is a new $7.4 million family aquatic center to replace Peterson Pool in Clague Memorial Park. All but the existing water slide tower will be demolished at the pool site. Ballfields and parking lots will be improved in the parts of Clague Park on both the east and west sides of Clague Road.

Westlake adopted a new Parks and Recreation Master Plan in 2015 which will guide these and other changes to Clague Park. Myself and James Bedell, Westlake’s planning director, served on the advisory committee gathered by the consultant to help in preparing the new plan. When Clague Park was discussed, possible plans to tear down Clague Cabin were mentioned. Jim and I convinced the consultant and committee that Clague Cabin is a Westlake landmark that deserves to be saved.

Funds have been set aside as part of Issue 53 to do just that. Plans are to restore Clague Cabin to more of an open pavilion as it was when it was originally constructed in the 1930s by the Works Progress Administration.

The Clague Memorial monument was unveiled in Clague Park during the midst of the Stock Market Crash of 1929. During the ensuing Depression, Dover Village had an opportunity to apply for federal funding for projects, and did.

Clague Park was a park in name only when the monument was built. WPA funding allowed local men to be hired to begin the task of turning the Clague farmland into a park. The remnants of orchards and vineyards were removed, land was leveled, the farm pond was enlarged, grass was planted and the thick grove of pine trees along the northern edge of the park was planted.