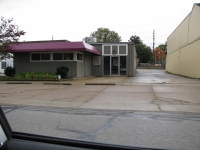 A recent picture of the building at 27105 Knickerbocker Road which housed the Bay Village NAPA store for at least a portion of the 1970s and '80s.

In a past Westlake | Bay Village Observer recollection of the now-demolished Westlake Kmart, I mentioned automotive supplies being among the wide variety of products sold there. Indeed, in its original configuration the store stocked an impressive (for a discount department retailer) assortment of oils, fluids, cleaners, chemicals and parts employed in routine automobile maintenance.

As a recently licensed driver in the mid-70s doing his best to keep a more-than-10-year-old, hand-me-down 1965 Mustang on the road, I found myself in Kmart’s automotive department on a regular basis. Eventually, though, a Bay High School kid such as myself would have to visit an actual auto parts store to round up a more “hard core” item than could be purchased from Kmart.

In my case that auto parts store was the NAPA outlet then at 27105 Knickerbocker Road in Bay (with CK Insulation currently operating at the address) and the first item purchased there was a remanufactured starter motor, I believe. That former NAPA location became my auto parts store of choice, though once or twice I did stop nearby at relatively short-lived independent parts retailer in the old Lawson’s store on the west side of Dover Center Road.

While eventually finding myself feeling right at home visiting the Knickerbocker Road NAPA parts store, frankly, early trips to the place tended to be at least somewhat intimidating. Those familiar with a certain soup purveyor featured in an episode of a popular '90s-era TV situation comedy might have an idea of the way I felt during those initial visits; when approaching the parts counter I’d better get right to the point of what I needed and be ready to provide any pertinent details of the vehicle for which it was needed.

In reality, the counter people at the Knickerbocker Road NAPA were pretty friendly and patient, so I needn’t have been quite so intimidated. Being a fairly young guy in a new environment, I was more afraid of appearing inept than I needed be.

Speaking of the parts counter, the main point of interface between customers and parts specialists at the NAPA store, the most striking thing was a long row, propped up prominently, of bound paper catalogs used to identify part numbers for the myriad items sold there. A seasoned, experienced counter person could navigate around those catalogs like a maestro. It’s now easy to forget how parts counter staff had to constantly thumb through voluminous catalogs since such information has long been relegated to electronic databases and accessed via a countertop computer.

The Bay Village NAPA store moved to the Dover Junction shopping plaza sometime in the late 1980s, I believe, and subsequently has not been a presence in the city for a number of years now. At any rate, while for some time no longer performing my own auto repair, the Bay Village NAPA store’s old Knickerbocker location was a fundamental influence in my automotive upbringing.