Bernie's ready; Browns should bring him in as coach 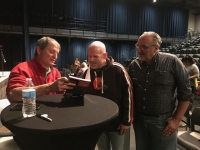 I recently attended a book signing for former Cleveland Browns quarterback Bernie Kosar at the Parma-Snow Library. He discussed his new book, "Learning to Scramble," which chronicles his rise from Youngstown to prominence as the leader of the University of Miami’s first national championship team, and then to glory in the NFL. The library's promotion materials stated that "the book, which also explores Kosar’s personal battles, is a completely authentic account of a talented man’s ability to not only learn from his mistakes, but to evolve and develop new ways of approaching life."

This event included a question-and-answer period where I learned that Bernie had been spending the past number of years raising his children on his own as a single parent; which is something that I could totally relate to. He answered a number of questions about his career, concussions, playing surfaces and the Pittsburgh Steelers.

He had just finished talking about getting his kids through school when he was asked why he wasn't doing any coaching. He referred back to the fact that his kids are grown up and that he now would have the time to fully commit to doing some coaching in the NFL. The audience responded with thunderous applause, while wondering out loud why the Browns hadn't already called. Are you listening, Jimmy Haslam?

At this time, when the fans have hosted a protest parade regarding the futility of the team's management, wouldn't it be a significant positive move to add Bernie Kosar to the coaching staff? I can't think of a better choice to bring a young quarterback along, whether it would be DeShone Kizer or a quarterback selected with the first pick of the upcoming draft. Are you listening, Jimmy Haslam?

In case you are unfamiliar with Bernie Kosar, Mr. Haslam, here is a synopsis. During his career, Kosar led the Cleveland Browns to not one but three AFC Championship games. Wouldn't you love something like that? He set a league record by throwing 308 consecutive passes without an interception! Can you even imagine something close to that? He set a record for consecutive playoff games with at least three touchdown passes during an era when running the football dominated the game. Mr. Haslam, Bernie knows the position!

Bernie went on to play for the Super Bowl champion Dallas Cowboys and Miami Dolphins before retiring in 1996. He's got a ring, Mr. Haslam, and if you have ever seen him on TV diagnosing a play, he can explain what happened to any simpleton, whether that be you, a rookie quarterback or anyone in between. If you truly want to improve the team and relations with the fans, get Bernie on board to improve all of our weekends!