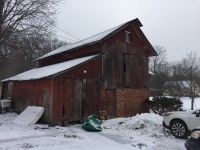 The Cooley barn, as seen from Dover Center Road, housed a vegetable stand for years. It is being disassembled but much of the wood will be upcycled into artwork. Photo by William Krause

A familiar sight to Westlake and Bay Village residents was the vegetable farmstand inside the old red Cooley barn on the east side of Dover Road across from the Porter Library drive. Robert Power Sr. was the proprietor who grew produce on the fertile land behind the barn. The vegetable stand is now closed due to the declining health of Mr. Power. His son, Rob Power, who owns the property, has had the circa 1828 Asher Cooley house, the barn and 2.3 acres of property for sale for several years.

Preparations to remove the barn started several weeks ago. The property can be divided into at least two lots once the barn is removed. The barn siding wood will be upcycled into large, stylized American flags by an artisan. The artisan is exchanging his labor to remove the barn for the wood siding and timbers he is salvaging. Some of the contents of the barn are to be donated to the Westlake Historical Society for future display at the Lilly Weston museum of early Dover history.

A recent visit to the barn was like walking into a time capsule, a hundred years and seemingly a “million miles” from Crocker Park. A BB gun (to scare off marauding critters which used to try to decimate the vegetable crop) sits next to an old Bone Cutter (patented in 1890) which was probably once used in the butchering process. There is an old wooden horse trough, an ox yoke and homemade ski poles.

Most intriguing is what looks like an over-sized hamster wheel mounted in the rafters. It still rotates on an axis with a large pole sticking out of its side. Was it used to separate grain from chaff? To lift heavy objects into the barn's attic? We don’t know (and if anyone does know, please contact me at wrk295@aol.com). Westlake Historical Society board member Ken Coeling posits that “if a rope or cable is attached to an extension of the axis, a force on the outside of the wheel will have a very large mechanical advantage and could lift a heavy object.”

At first glance the barn has a Victorian-era look about it. The Ohio Historic Inventory form filled out for the property years ago deemed the barn “circa 1890.” The scalloped wood siding and trim around the windows look late-19th century. However, inside, the post-and beam-construction, including logs used for some of the structural members looks older.

A local historic preservationist from Trumbull County was consulted about the age of the barn and the use of the “hamster wheel.” His guess was that it was a “tumbler” used to separate grain, though he had never seen anything quite like it. He also observed the tightly fitted boards on the wall beside it and posited that this part of the building was once part of a grainery because the effort expended to fit the boards together would have been in order to prevent air flow in this part of the building from blowing the winnowed grain away. His guess was that the current barn was a mash up of several older structures, jacked up above a brick base later constructed beneath them.

Another interesting feature not apparent from the road is a face figure carved into the peak of the south-facing gable. It may be a whimsical Victorian touch or perhaps something to scare the birds or evil spirits away? I have never seen anything like it though someone has suggested that they have seen similar carvings in Amish barns. This folk art piece will find a home in the collection of the Westlake Historical Society, thanks to the generosity of Rob Power.

We would also like to thank Jim Gearhart and Bob Lamb, members of the Olmsted Historical Society Frostville Museum who were willing to help us evaluate the contents of the barn on one of the coldest days of the winter.