Cooley house is one of Westlake's oldest structures 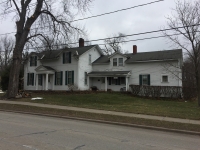 The Asher Cooley house on Dover Center Road was built in the early 1830s. Photo by William Krause

The 2.3-acre property at 2871 Dover Center Road, which was the subject of this column in the last issue, will change families for only the third time since it was settled. The lot, currently for sale for $295,000, has been owned by just two families in the last 200 years – the Cooleys and the Powers.

According to the book “You’ve Come a Long Way, Westlake” by William Robishaw, Asher Cooley was a farmer in Massachusetts, and in 1815 visited Dover Township, where he selected 44 acres, which he obtained as a Connecticut Land Grant.

Three years later, the then 31-year-old Asher Cooley loaded his wife and five children, and what possessions they could carry, into an oxcart. They traveled through the wilderness to settle on their property in Dover Township, arriving on Oct. 19, 1818, after a journey of 5-and-a-half weeks. Asher’s was only the fifth family to take up residence in the township.

In 1829 tax records, Asher Cooley is listed as owning 44 acres in the location of today’s house and barn. The fact that Asher obtained his original 44 acres with a land grant may explain why the original deed could not be located in Cuyahoga County recorded documents.

The Asher Cooley house was plaqued as circa 1828 in the 1970s. It is unlikely that it was constructed in 1828 or 1829 because this 44-acre property was only valued at $91 as late as 1830. There are three years of tax records missing but by 1834 the same 44 acres are valued at $291. This $200 increase indicates that the existing Asher Cooley home was constructed between 1830 and 1833. This makes it probably the third or fourth oldest existing structure in Westlake.

Five more children were born to Asher and Lydia between 1818 and 1830. The book “George Lathrop Cooley and Clara Elizabeth Hall” by Harl Presler Aldrich, a Cooley descendant, includes excerpts from letters which describe in great detail what a struggle it was for the Cooley family to make ends meet in their early days in Dover. That is probably why they continued to live in a more rudimentary home on the property until 1830.

The 1845 tax records show the 44 acres reduced by one-fifth of an acre to 43 and 4/5 acres. Early Dover school board minutes indicate that in 1838 “Deacon” Asher Cooley sold a portion of his land for $25 for the construction of a one-room school house.

A pencil notation in tax records clearly states that a $200 increase in value in 1852 was due to an addition to the house.

Honorable John McCrea Cooley was a farmer who lived his entire life in the Asher Cooley house. His son Arthur was educated at Ohio State and Chicago Veterinary College, was influential in Ohio livestock affairs and had a veterinary practice and residence in Cleveland for over 30 years. After retirement Arthur moved back to Dover.

In 1895 the Cooley home was deeded to Arthur Cooley. This may have been when the recently removed barn was “gussied up.” After Arthur’s death in 1926 and the death of Arthur’s wife, Flora, in 1933, the Cooley house and barn passed on to their children, including son Dr. Richard S. Cooley, another veterinarian.

It was Richard and his siblings who sold the property to the Power family in 1941. They may have felt less of a connection to Dover because they had grown up in Cleveland. It is my understanding that the other Cooley family members were quite upset when their ancestral Dover family home was sold without their having an opportunity to purchase it.