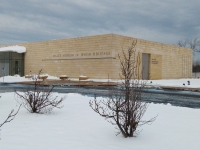 This month’s Magical History Tour is the Maltz Museum of Jewish Heritage, an easy 30-minute drive on I-480 East to Beachwood. The information in this article was sourced from the museum's guidebook, available for purchase in the giftshop, and the exhibits themselves.

Nestled at the base of a small hill sloping down from Richmond Road is the Maltz Museum of Jewish History, the single-story structure of glistening glass and golden Jerusalem limestone complementing the graceful domes of Temple-Tifereth Israel rising up from behind. Once inside, the understated lobby offers access to three brilliant exhibits: The Jewish Experience in Northeast Ohio – An American Story; The Temple-Tifereth Israel Gallery; and Jews and Medicine in America.

Opened in October 2005, the museum tells the story of the Jewish immigrants who settled in Cleveland. What began as a tiny, marginalized community grew into a large, thriving one, whose impact was felt across the United States and around the world. Interestingly, while telling this story the museum discovered the stories of every group of immigrants, and so alongside that of the Jewish community, "the Museum relates another story as well – one of diversity, of understanding and of mutual respect for all the peoples and cultures that comprise the myriad threads of the American tapestry." As part of this understanding, the museum proudly sponsors an annual "Stop the Hate" campaign, empowering students to speak out and make a difference in the world.

Though there is no set order, it is recommended that visitors start with the "Jewish Experience in Northeast Ohio" exhibit. Here the stage is set with the arrival of the first 15 Jewish immigrants to Cleveland in 1839. The ensuing decades saw their numbers swell, chronicled by mementos and objects belonging to members of the community. Following their progress, visitors are treated to displays of entrepreneurial ambitions and successes (such as the beginning of American Greetings), the founding of community organizations and social services (versions of which many still exist, like the Mt. Sinai Health Care Foundation), and Jewish participation in the performing arts and military service. This entire experience is exceptionally well done, from the inviting layout of the exhibit that draws visitors through the displays to the variety of the objects themselves, punctuated by video footage offering expert history lessons interspersed with personal testimonies.

These amenities continue through the small but striking space devoted to the Jewish faith and on throughout the rest of the exhibit. The latter's broad focus on national and world events beginning with the tumultuous 1930s is tied with Cleveland's Jewish community, as it traces how individuals reacted to or were affected by the Great Depression, anti-Semitism at home and abroad, World War II and the aftermath of Nazi rule and the Holocaust. While the pain and sadness are palpable, they are not permitted the final say: "The World Remade" details the promise of Israel and the roles the Jewish community in Cleveland played in its establishment. The exhibit ends with "American Dreamers," a celebration of Jewish intellectuals, entertainers, inventors and leaders.

This exhibit itself is enough of a reason to visit, so the addition of the stunningly beautiful "Temple-Tifereth Israel Gallery" and thoughtfully entertaining "Jews and Medicine in America" are a delightful bonus.

The Temple-Tifreth Israel Gallery contains 175 artifacts owned by the synagogue and covers three areas of Jewish religious life: Sacred Texts, Sacred Places, and Sacred Times and Seasons. The objects themselves are splendid, and the informative text is understandable to those with little to no knowledge of the tenants and practices of Judaism.

Last but not least, "Jews and Medicine in America" currently occupies the Special Exhibition Gallery, detailing Jews in the medical profession and the many contributions they have made, both in Northeast Ohio and further abroad, while also discussing aspects within the field that affect all people, such as genetic testing and physical fitness. The exhibit ends with a thought-provoking glimpse at the future of medicine as it continues to change and diversify.

Diversity is indeed the common thread that runs through the Maltz Museum of Jewish Heritage, for while the focus is on the Jewish men and women who made Cleveland their home, in the words of Milton and Tamar Maltz, "the Museum is also a reflection of the extraordinary diversity of the region in which we live – a human panorama featuring representatives from every conceivable background." For the story of Jewish life in America is a profoundly human story, with ups and downs, triumphs and tragedies. It is the story of people becoming Americans, the story of America's people. It is the story of us.