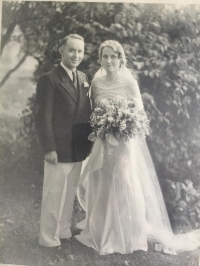 Frank and Claribel Power, pictured on their wedding day in 1932, purchased the Asher Cooley house in 1941. Photo courtesy of Jan Power

The last in a series of articles on the Asher Cooley house.

The family legend from both the Cooley and the Power families is that a Mr. Cooley was putting up a real estate sign indicating that the Asher Cooley house was for sale and Frank and Claribel Power were driving by and bought the house on the spot. Other Cooley relatives deeply regretted the sale.

A 1930s directory of Dover has Dr. R.S. Cooley residing at 2871 Dover Center Road. Arthur, grandson of Asher and Lydia, had died in 1926 and his widow, Flora, died in 1933. Probate was complete in 1935 and the property was inherited by Arthur and Flora’s three children – their son, Dr. Richard S. Cooley, and twin married daughters, Ellen Carter of Cleveland Heights and Lucy Koones of Shaker Heights. At the time, Richard Cooley was married to Myrle Krause (no relation to the author). In 1936 half of his 1/3 share was transferred to Myrle Cooley. By the time the deed for the property was transferred to Frank and Claribel Power, Myrle was now named Myrle Potter and Richard was with his new wife, Hallie Cooley, in Oklahoma.

Claribel Power’s maiden name was Blanchard. She was born in 1907 in Athens, Ohio. U.S. Census records from 1910 list her as a child aged 3 years old, living with her family in Dover on Dover Center Road, possibly near Rose Road. This places her living near the Asher Cooley house as a young child. Her father, Arthur, was a fruit farmer, renting the property in Dover; her mother was born in England. By 1920, the family is living in Rocky River and he is a clerk in a woodworking company. In 1930, when she is 23, Claribel is employed as a bookkeeper for a printer and her father is a watchman for a construction company. She and Frank Power were married in 1932.

Frank was born in 1906. The 1920 U.S. Census has him living in Rocky River with his father, Robert, who was an editor, his mother who was born in Scotland, his younger sister and his grandfather and uncle who were compass adjusters. By 1930 the family is living in a large home on Lake Road in Cleveland. The household consists of his parents, two sisters, his grandfather, a grand uncle and two servants. His grandfather is the president of a company that manufactures metal products and his father is an editor of a magazine.

According to grandson Rob, Frank was captain of a football team. The 1940 Census has Frank and Claribel renting a home on Wooster Road in Rocky River. He had completed one year of college and is working as a newspaper circulation route-man. They have their first two children and share their home with her brother, who is a fireman.

This sets the stage for the drive in the country (Dover/Westlake) that results in the Cooley house being sold to the Power family in 1941. Perhaps Claribel wanted to see the farm nearby on Dover Road that she had lived in as a young child? Frank and Claribel had three additional children while occupying the Asher Cooley house. According to grandson Rob, Frank became a typesetter for the Cleveland Press.

Rob’s father, Robert, and his Aunt Pam were two of the five children of Frank and Claribel who grew up in the Cooley house. They attended Westlake High School. Pam was homecoming queen. The Power family tragedy is that when a young married Pam was two months pregnant her husband was killed on Dover Road when he stepped into the road to assist a dog or cat that had been hit by a car. Rob relates that his Aunt Pam was known as one of the nicest and most generous people there was and welcomed all into her home with hospitality.

Frank Power died in 1972 and Claribel remarried and moved to Dayton, so the Cooley house was essentially Pam’s for a long time. Claribel died in 1992.

Robert Power married Janice Ruth, a younger Westlake classmate, in the mid-1960s. They had two children, including Rob. He had a landscaping business and grew the vegetables that were a familiar sight in Westlake when they were sold from the old red barn on the property. Both Robert and Janice continued to occupy the Asher Cooley house until Robert’s declining health required more care than could be provided at home.

The Cooley house has been owned by three generations of the Power family and is the family house where the extended family gathers. Janice has loved the house but she feels it is time to let it go. Hopefully a third family will come along to cherish the home for many more years.