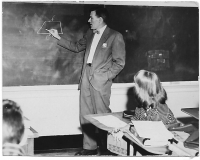 “My favorite teacher was ...” is a subject often discussed when remembering school days. Teachers are remembered because he/she taught us something we still use, were kind, understanding, fair or gave of their time.

My sister, Gay, and I were having trouble with algebra in the ninth grade. One day, after class, we walked up to our teacher, George Meyer’s, desk and explained our problem. He said, “Next period is my free period. I will be in this room. I’ll give you a hall pass and you can come in and I’ll help you.” I don’t remember how long we spent with Mr. Meyers on his free period, but we did figure out algebra. We never forgot his kindness.

Who was George Meyers? How much do we ever know about the teachers who become so important in our lives?

George grew up in Pittsburgh, Pennsylvania, with his mother, Mary, and three siblings, Marie, Joe and Esther. It was the Depression and times were hard. Mary had to make a decision – she decided to put her children in the Lutheran Orphanage while she took a job baking bread at a local bakery. George was 8 years old at the time. It was a tough existence.

Mary knew the children would have food, housing and go to school, and she would be able to pay the orphanage a little each week. At the orphanage, everyone knew George by name not because he was good but because he would run away and the next day be returned, ending up washing dishes.

When George was 16 years old, Mrs. Laura Sorg, who had just lost her husband, called the orphanage asking for a young man who could help her in her general store. The orphanage suggested George, and he was driven to Ann Arbor, Michigan, by the minister, to live in her home and become her helper. He was there for two years.

In 1937, at age 18, he graduated from Ann Arbor High School. George would later say, “She saved my life.” While there, he enrolled in a government program, Civilian Conservation Corps, a work relief program. Here he learned wood/metal shop and forest conservation, graduating in 1939.

In 1940, George went back to Pennsylvania to be reunited with his mother and siblings. On April Fools' Day in 1941, George met Sally Murray on a blind date. By May they were engaged and by August married. When WWII came, George enlisted in the Navy. On the G.I. Bill, he graduated from California State Teaching College in Pennsylvania. During this time, he and Sally were starting a family: Winnie, George and Pamela.

An early teaching assignment brought him to Bay High School in 1951, teaching algebra. In 1956, he taught algebra and was the metal shop teacher. When the middle school separated from Bay High School and moved west down Wolf Road, George helped design the new metal workshop in the new building.

Ron Rush was the athletic director of the Bay schools at the time. George became his assistant director. They had mutual respect for each other. George was in charge of the ticket concessions at the football field. He never missed a football game in 30 years. On the gym walls, he painted Olympic murals and “Welcome to Rocket Country.” At the new football field he managed all maintenance, the sprinkling system, and chalking the fields. Always behind the scenes.

George taught in the Bay Schools for 31 years, until 1984. George wasn’t an easy teacher as he expected respect and discipline from his students. He remembered his early life and the people who helped him. He instilled good work ethics and enforced classroom rules. Being late for class wasn’t allowed. He would say, “In real life, you can’t be late for work and have the boss think it is OK. Learn now. Be in your seat when the bell rings.”

George and Sally lived on Knickerbocker Road in Bay. His Christmas tree always had blue lights for Bay High.

George made a difference. In 1995, George was honored as a Distinguished Educator of Bay High School, acknowledging his contributions. Ron Rush introduced him. It was a proud day for the family. Gay and I were there for a hug.