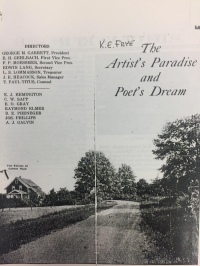 The majority of the lots were 50 feet wide and they fronted on Cahoon and Dover Center roads and the newly platted streets of Ellington, Langale and Richmar. The plat also created Valley Ford Road which gave the subdivision an entrance on Cahoon Road by literally fording Cahoon Creek. The right-of-way for Valley Ford Road was vacated in 1965 and now forms part of the shared driveway for 990 and 1006 Richmar Drive. The westerly end of the street climbed out of the valley of Cahoon Creek where the large brick home at 931 Cahoon Road was constructed in 2005.

The development was promoted in a brochure, a copy of which is part of the Westlake Historical Society collection. The brochure is titled “Dover-Bay Estates: The Artists’s Paradise and the Poet’s Dream.” Pictures in the brochure include views of the frontage on both Cahoon and Dover Center roads as well as some of the wooded creekside lots.

The brochure emphasizes the beauty of the wooded lots in close proximity to the beach, golf courses, shopping and schools – all still selling points today. It also mentions proximity to the interurban and the passenger services at the depot of the Nickel Plate railroad and the rapid transit train they predicted was surely soon to come. The interurban ceased operations in the 1930s and the passenger service on the Nickel Plate ended in the 1950s.

Some artistic license was taken in that the “estate” home pictured in the brochure was actually not on a lot within the subdivision but across the street. It had been constructed in 1913 and remains with subsequent additions to it on the west side of a bend of the road at 966 Cahoon.

Eli purchased large chunks of land, eventually amassing a true estate of many hundreds of acres. His holdings at one time extended from south of Cahoon and Detroit roads all the way to the railroad tracks and along the west side of Dover Center Road. An 1852 map shows that there was a sawmill just west of where Ellington Road intersects Richmar Road today. Eli Clemens' Federal style home was located on the northwest corner of Cahoon and Detroit roads. It still exists at 29445 Detroit Road, where it was moved in 1949.

Eli’s son John continued farming a portion of the land after Eli’s death in 1863. An 1880 Census has him operating a farm of 215 acres. It was larger in size and value than Joel Cahoon’s Rose Hill farm in Bay Village. It included a 75-acre woodlot which probably included the future site of Dover Bay Estates due to the size of some of the native oaks and hickories which are still part of the neighborhood.

Today, the Westlake zoning code defines an estate sized lot as a minimum of 2 acres in size and 150 feet in width. The typical lot in Dover Bay Estates was 8,500 square feet and 50 feet wide. This is just slightly larger than the standard lots of the era, platted in Lakewood or Bay Village. Only one house was constructed before the depression hit, at 1047 Richmar in 1928. The subdivision lay fallow until after WWII when the post-war suburban building boom took off. Most of the homes in the subdivision were constructed in the 1950s. Many of the homes were constructed on 75-foot or 100-foot sites created by combining part or all of two of the original platted lots together.

The brochure proved to be prescient in that the neighborhood eventually did become the home of, if not poets, then various types of word-smiths. William Donahue Ellis, the author of many New York Times bestseller historical novels in the 1950s as well as much non-fiction later, owned the quaint red Cape Cod at 1060 Richmar. Bill Robishaw, former Holly Lane School principal and Westlake Historical Society president and author of the massive history of Westlake, “You’ve Come a Long Way Westlake,” lived at 1025 Richmar for many years. My own home, at 27333 Ellington was constructed in 1952 for Jack Keeler who was in advertising. It was constructed by the Krumweide brothers of Bay Village who were carpenters, builders and artists with wood.