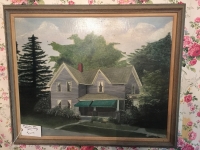 An oil painting of Mitchell/Shie house, now part of the Westlake Historical Society collection. Photo by Will Krause

The house could be restored on its parcel and a second home could be constructed on the parcel with the barn. The barn may have been the location of Hickory Hill Stables, offering riding lessons and pony rides in years past. The parcels combined could accommodate up to three horses and other farm animals such as chickens as long as the owner meets other requirements in the city code such as distance of structures housing them from abutting residences.

Dr. Marvin Shie Jr., a popular local OB/GYN doctor, and his wife, Ruth, purchased the home from Harry and Lucy Hoag in 1955. Ruth died a number of years ago and Dr. Shie continued to own the home until his own death recently. Lucy Hoag was the daughter of Margaret Mitchell, who with her husband, William Mitchell, were the original owners of the home so it has only been owned by two families in its 136-year history. An in-depth history of the house can be found in my previous Observer article published Nov. 25, 2014, titled “Historical society identifies another century home in Westlake.”

In 1849 Margaret Griffin (the future Mrs. Mitchell) came with her parents from Ireland. She married John Thomas Flynn and had two daughters with him. John served in the Civil War and died from his injuries in 1869. In 1865 William Mitchell, a bachelor from England, purchased 97 acres from the Sperrys, most likely including the land that is the subject of this article. In 1876 he sold or donated an acre of land for the Mitchell schoolhouse which still stands at 24231 Center Ridge.

In 1877 William married the widow Flynn and they had two additional daughters. According to May E. Weston, teachers boarded in the Mitchell house and Margaret was known to the schoolchildren of Mitchell School as “Aunt Maggie Mitchell.” Margaret continued to live in the house until she died at 96 years old in 1940. Her daughters Katie Flynn and Lucy Hoag both taught in the Mitchell schoolhouse.

The descendants of Dr. Shie generously donated several items to the Westlake Historical Society for use in the Lilly Weston museum of early Dover history. They include what appears to be an 18th century rope bed frame constructed of cherry wood and a Shaker chair. Both would have been the type of items furnishing the Lilly Weston house when it was first constructed in 1844.

The bed they believe may have been purchased in Cape Cod as an antique and the chair descended in their mother Ruth Dornback’s family who lived in Lake County, Ohio. The North Union Shaker community, located in what is now Shaker Heights, Ohio were founded in 1822 and crafted chairs for their own use and for sale. Further research is needed to determine if the chair is indeed Shaker made.

An oil painting of the house was also acquired for the historical society just in case this historic century home is demolished like so many others before it in Westlake and Bay Village. While fairly simple on the outside, the inside of the house includes grand woodwork and doors that harken back to the period just after the Civil War when the Italianate style was the rage. On the other hand, if a buyer can be found who loves old architecture, fresh eggs and horses, the house may survive another 136 years or more.