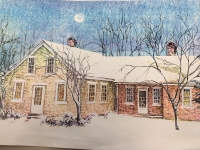 In 2000, when the city of Westlake accepted the gift of the 1844 Lilly Weston house and one acre of land abutting the Westlake Recreation Center Park from Alice Ladanyi, a Weston descendant, they set aside $50,000 to stabilize and button up the exterior envelope of the building and install the historic marker.

The city hired Lewin and Associates, consulting engineers, to do a structural analysis in 2017. The city of Westlake and the Westlake Historical Society shared the cost of the $7,000 study. The city’s $3,500 share of the cost of the study was taken from the original $50,000 set aside by the mayor and City Council, which now has a remaining balance of $5,000. The rest of the original $50,000 was used to remove a 1960s addition and modern improvements from the interior of the house, re-construct a portion of the rear wall, put on a new roof, chemically strip mustard-colored paint off the exterior stone and brick, repair and paint exterior windows, doors and trim, and repoint the mortar.

When the Westlake Historical Society leased the building from the city in 2004, the agreement was that the Society would raise the rest of the funds to restore the structure into a museum of early Dover history. The Society was able to raise about $20,000 which was used to make some of the above-listed improvements and pay for electricity to the house.

However, due to a severe roof leak during the 1990s when the house was vacant, sections of the floor and ceiling joists and beams in the 1855 brick portion have deteriorated and need to be replaced. That led the Lilly Weston Committee, re-energized since 2016, to come up with a related theme for a fundraiser. The donations will go into the restoration fund and a plaque is planned inside the home and metal tags on the building parts which will detail which new beam ($1,000), joist ($500), or stud ($250) the donor has “adopted.” The plaque will also list those who make $100 or $50 donations.

The property is now linked to the Recreation Center all-purpose-trail with the “Heritage Loop Trail” which passes by the house. Now that the new Westlake Elementary School is under construction nearly across Center Ridge Road from the Lilly Weston house, the time is ripe to complete the next phase of this restoration project.

The committee has had the stone portion of the house open this summer for the first time in 14 years in conjunction with the Westlake United Methodist Church's Cruisin’ Westlake events thanks to the assistance of committee member Bob Myers and Tim Chrisman and Westlake Director of Inspections Don Grayem. Tim Chrisman, the owner of Lake Erie Woodworking Inc. donated his time to construct elegant barricades to keep visitors to the house safe.

The open houses included a “pop-up” museum of early Dover artifacts, historic building parts and Weston family heirlooms. The last open house was during the Recreation Center's Fall Festival on Oct. 13. There were between 150 and 200 visitors to the house this year.

Thanks to the encouragement of Mayor Clough and State Rep. David Greenspan, Westlake Planning Director James Bedell applied for a $200,000 Ohio Cultural Facilities Grant which has been secured. The committee continues local fundraising to obtain our local match. Since the committee began this fundraising campaign last fall, nearly $5,000 has been raised with this campaign and over $6,000 from yard sales and other events spearheaded by committee member Jan Schmitt.

I had the opportunity to walk through the Lilly Weston house with Dwight Miller, a consultant for the construction company who is doing design-build estimates in conjunction with the city architect for the next phase of restoration of the house. He pointed out beams decimated by post-hole beetles and joists not up to the job of meeting the codes required for a building used for public or commercial use. The man is passionate about wood! He can identify in an instant the ash flooring, white oak framing and massive tulip poplar beams supporting the post and beam roofing structure.

A new discovery in the easternmost rooms ceiling are a number of joists cut from tiger maple. He explained that this beautiful wood is coveted today for gun-stocks but 163 years ago the builders framing the brick addition to the house were just using what wood was available to get the job done. He told me that tiger maple does not come from a particular type of maple tree, it is a genetic variant that shows up in only one in 100 soft maple trees and one in 1,000 hard maple trees.

To keep costs down, some of the ceiling structure will be covered again; a decision will need to be made if this tiger maple will remain visible after the restoration. He also pointed out that a staircase once ascended along the far eastern brick wall in the same room up to the second floor of the brick addition.

One vision for the house is to remove the 1960s staircase from the stone portion of the house so that the first and second floors can be kept open for displays with as much of the original structure visible and use the middle room of the brick wing for the staircase, main entrance and ADA compliant unisex bathroom.

The easternmost room will be used for offices for the Historical Society and the upstairs of the brick wing for storage.

The basement, accessible from double doors in the back, will be used for displays of old farm equipment in the rustic setting provided by the thick stone walls and exposed structure. The incongruous 1960s cinder block chimney foundation could be veneered with slices of salvaged sandstone in the same tooling pattern as the original stone block basement walls.

As I pass the Lilly Weston Committee Chair position to Dr. Lillian Boehmer, I want to offer a thank you to all those who have helped with these endeavors and thank you in advance to all those who contribute to this project in the future. The over-arching goal of this project is to educate Westlake children (and adults) about Westlake’s unique past.

Visit lillyweston.com to donate to the fundraising campaign.