Finding the 'stuff' of my life 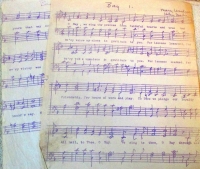 A mimeographed copy of the words and music for the Bay High Fight Song from 1946.

I am moving. I’m selling my house after living in it 48 years. I’m cleaning out my life. When I found this house at 26758 Russell Road, in the horseshoe, I was home. It was perfect.

Over the years I have kept too many things, "my stuff," I call it. So I am leafing through my stuff and I come across a mimeographed copy of the words and music for the Bay High Fight Song from 1946. Then I open some more music and see it is the World War II black music with the white lettering. During WWII, this was the only thing you could buy.

My family was very music oriented. My grandfather bought my mother a baby grand piano for her 14th birthday and it sat in the living room of our house. She could play anything in the popular music genre. My sisters, Barb and Gay, and I took lessons from a lady, Miss Quinn, at Cook and Detroit roads in Lakewood. Barb could really play the piano. She went to Chicago one summer to take lessons under Dr. Rudolph Ganz at the Chicago Conservatory of Music. I still have all of her classical music books plus a few John Thompsons.

Well, like I said, I have lots of "stuff." Gay and I used to keep scrapbooks of movie star pictures. Found them again. Then my paper dolls and "Tilly the Toiler" from the Plain Dealer in the 1950s. I will have a great sale in December. I looked at every item in my stuff. I kept some and let some go to the sale. Sometimes it made me sad but I had to do it since I am downsizing.

My dad saved everything, not just the family stuff. I found great treasures. How many of you still have an Indians program from the 1948 World Series? The game Gene Bearden pitched, Dad scored it. A 1920 newspaper that has the headline “Ray Chapman Is Dead” and the program from the last full game Ray Chapman played in, which Dad scored, the day before Chapman was hit in the head by a baseball and died 12 hours later.

The 1954 program from the Cleveland Browns Championship game against Detroit. Wooden tennis rackets and golf clubs. Who knew what a Niblet was? The football my Dad used when he played for the East Tech High School football team in 1917. Newspapers and Life magazines that feature John Glenn circling the moon and Neil Armstrong landing on the moon. Ohio State football programs from 1920s. A schedule for the Cleveland Barons in the 1950s. Tons of sheet music and Photoplays and Modern Screens. The Bay High Rockets programs from the 1950s and an invitation to the Lakewood Country Club for a dinner of celebration after the 1954 football team won the championship.What to do with all my family pictures? I shredded some, so they wouldn’t be flying around a landfill somewhere. I kept some. So I am very busy. If I miss a week you all will know why. This was one of the hardest things I've ever done in my life.