With Landmark closing, Westlake loses another link to farming roots 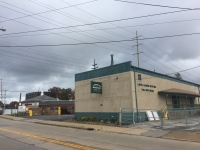 The existing Landmark store, which recently closed. The location next to the railroad was important for deliveries when this was a coal and feed supply business.

With the recent closing of the Landmark Lawn & Garden Supply at 677 Dover Center Road, another link to Westlake’s agricultural past is gone. Landmark was a lawn, garden and pet supply business that had served the area for over 75 years. This family-owned operation also delivered bulk landscape supplies for do-it-yourself projects. Landmark Lawn & Garden Supply was located on Dover Center Road, right next to the railroad tracks.

Before it was known as Cuyahoga Landmark Inc., it was the Dover location of the Cuyahoga Farm Bureau Co-Op Association Inc. According to Case Western Reserve University’s Encyclopedia of Cleveland History, the Cuyahoga County Farm Bureau was organized in 1915 to provide farmers in the county with a vehicle for collective action in representing, promoting and protecting farm interests.

When Hugh died in 1943, Russell was the executor of his estate and in 1944 sold the property to the Cuyahoga Farm Bureau Cooperative Association Inc. During the 1950s and 1960s Russell was known to many Westlake families as the custodian of Dover Elementary School who lavished special care on the shrubbery, according to Bill Robishaw’s book, “You’ve Come a Long Way Westlake.”

The Robishaw book also includes a 1982 interview with Lee Burneson, the superintendent of Dover/Westlake schools from 1924 to 1963, which makes it easy to date the existing Landmark building. Mr. Burneson started with the schools in the Fall of 1921 and to earn extra money over the summer of 1923 he helped the Peases build the Landmark building (or at least a portion of it).

Thanks to the generosity of Christine Kitchens and the efforts of Jan Schmitt, the Westlake Historical Society has recently acquired a suite of Victorian-era furniture from the Pease family which is on display at the Clague Museum.