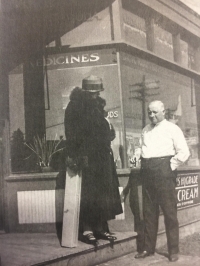 M.C. Kutchin in front of his drug store at 676 Dover Center, circa 1930. Photo courtesy of Kutchin family

When individuals have a question about a building in Westlake one place they look for answers is Westlake City Hall. If it is an older building they tend to get referred to the Westlake Planning Department, where I work as assistant planning director.

Descendants of Milo Kutchin showed up one day with a number of family pictures. I believe they knew that Milo had lived on First Street and that he had run a drug store on Dover Center Road near the railroad tracks in the early 20th century. Most tantalizing was a photograph of a trim brick building complete with a pharmacy trade sign consisting of an over-sized mortar and pestle mounted on a pole in the sidewalk. The question they posed: Could this building have been located in Dover?

The house was easy to find. Milo owned the home at 26986 First Street which passed to his wife, Edith, and son, Robert Wing Kutchin, upon Milo’s death in 1944. One of the other photographs shows Milo in shirt sleeves with a 1920s era, stylishly dressed woman in front of his store. Signs advertised Medicine and Ice Cream – clearly a drug store. Another photograph from about the same time has three men standing in front of the same store with an early automobile and Dover Lumber Company in the background.

The location of the store in relation to the lumber company places it at what is today the Copper Cup, Ironwood’s annex, at 676 Dover Center Road. It is most likely the same building remodeled with a brick façade because a 1927 plat book puts a building in the exact same location and the county lists the construction date of the current building as 1921.

Milo was born in Omro, Winnebago County, Wisconsin in 1875. He attended four years of college. He married Alyce Wing, a 20-year-old music teacher, in Mississippi in 1900. Her father was an editor and publisher who had been born in New York. In 1908, Milo and Alyce are living on Willow Street in Appleton, Wisconsin, and he is selling drugs and druggist sundries on Railroad Street a few blocks away.

By 1910 they are living on Cedar Street, near a railroad line in Eland, Wisconsin, and he is a retail merchant in drugs. Does anyone see a pattern here?  The brick building with the mortar-and-pestle sign in the  photograph was most likely in one of these Wisconsin towns. The trade sign was a way to advertise his services to non-English-speaking immigrants.

Milo’s WWI draft card has he and Alyce living on West 4th Avenue in Columbus, Ohio, and a city directory at that time has him employed as a “Com. Trav.” at 1396 Neil Ave. The 1920 Census has him and Alyce living on West 4th with their 8-year-old son Robert, and he is employed in “Commercial Travel” (traveling salesman?) for a wholesale dairy company. She is employed as a saleswoman with Corect Co. Tragically Alyce died in 1924 and she is buried with her family in Mobile, Alabama.

When Milo died in 1944 his funeral services were held at the Clifford Pease funeral home (which is currently known as Jenkins Funeral Chapel in Westlake). Condolences were extended to his wife Edith, son Robert, and grandson Danny. Edith died in 1971; she is buried with Milo in Omro, Wisconsin.

The family also shared a photograph of Robert Wing Kutchin and Robert Daniel Kutchin taken about 1955 on Easter Sunday in front of the circa 1853 Dover Methodist Church, 27330 Center Ridge Road. The building still stands across Center Ridge from Porter Library as the offices of a landscape architect. Pictured with them are Robert Wing Kutchin’s wife, Mary, and their daughter, Patricia.

Milo Kutchin’s life illustrates the impact that the railroad had on mobility, migration and retail during the late 19th and early 20th century in the American Midwest.