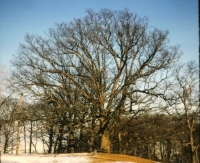 "Her Majesty" stood on top of the hill in the Cahoon Park walking track area on the west side of Cahoon Creek, across from Rose Hill.

“Her Majesty,” a mighty oak tree, stood atop the hill on the west side of Cahoon Valley over looking the lake and the mouth of Cahoon Creek. The trunk of the tree was enormous. Seven girl scouts once locked hands and circled the tree to see just how big it was. They all fit around the tree.

One of the huge branches spread out from the tree like a bench six feet from the ground headed south. Many a bridal party had their picture taken under this branch of the tree. Everyone walking on the walking path enjoyed her magnificence. Ten years ago, this tree was hit by lightning and lost. It was a designated “Moses Cleaveland Tree,” one of five standing in the village.

One of these trees stood in the way of the I-90 freeway. The county had to pay us for that one. Another oak tree stood on Cahoon Road across from Osborn Road. It was struck by lightning and destroyed. In fact, two of the other trees, both oak trees, were also struck by lightning. One was “Her Majesty” in Cahoon Park and the other was at Forestview and Lake roads. There was a maple tree behind Mim Shepard’s house on the north side of Lake Road. It was our last standing Moses Cleaveland Tree. A few years ago, it fell over and down the cliff .

We still have some trees growing in the village that are aging with grace. Two are oak trees and stand in Cahoon Park. One is on the west end of the park next to the old road bed for Lake Road (see my last article), and one is on the south side of Lake Road on the east side of the valley across from the boat club where the Sage house once stood. On the north side of Lake Road across from Pinewood Road, east of the cemetery, is another old tree standing near the sidewalk. The age of these trees has not been determined as far as I know, but just look at their magnificence.

We have removed many old and new growth trees in the village the last 20 years. Residents seem to be more opted to cut down a tree than rake leaves. The trees along Lake Road are disappearing fast. I had two trees in my yard which I saved. They both are 50 or more years old since I had lived in the house for 48 years and they were there when I moved in. Someone else will have to take them down. I never could.