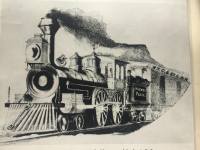 The first locomotive for the Nickel Plate. Image from "The Nickel Plate Road: The History of a Great Railroad Company" by Taylor Hampton, World Publishing Company, Cleveland and New York, 1947.

As stated in Part I of this series of articles about the New York, Chicago and St. Louis Railroad, it was the editor of the Norwalk Chronicle newspaper who is credited with christening the railroad the “Nickel Plate.” As early as March of 1881 he described it as the “nickel plated railroad.”

Commercial nickel plating had begun in 1870 and was beginning to attract attention by 1880. The editor said he came up with the name on the spur of the moment when printing some notices for a public meeting to be held in Norwalk to discuss what the townspeople were willing to offer to have the railroad come through their town. It was a common practice at that time to offer free right-of-way and cash incentives to lure a railroad to pass through your town, similar to the vying for Amazon facilities with tax incentives today.

He said that: “The popular slang phrase of the day to express one’s satisfaction with a plan or an article of any kind, was to say it was ‘nickel plated’. That conveyed the impression to the people of the time that the article referred to was all right, or in other words ‘was a good thing’.” The company quickly adopted it as their trademark and the headquarters of the railroad in Cleveland awarded the editor Pass No. 1 on the railroad in 1882.

The headquarters had been established on two-and-a-half floors of the Hoyt Building downtown – at St. Clair and Bank Street (West 6th) – the same month that the editor had first dubbed the road the “Nickel Plate.”

Another item of local interest is that Daniel P. Eels, who had established his summer home in Rocky River just a month after plans for the construction of the Nickel Plate began, was the heaviest Ohio stockholder and first director of the railroad. With his Rocky River land purchase, he made sure the railroad would literally stop at the gate of his estate and later he would keep his own private rail car ready and waiting on a siding there. A private rail car was the equivalent of a private jet today.

Eels' Rocky River estate “Oakwood” was, according to a wealthy and travelled friend of his, a place unexcelled in America. When he didn’t want to wait for the train he could take his elegant steam yacht to Cleveland almost as rapidly.

Only 21 months after the company was established, the first Nickel Plate passenger train, a “special,” left Chicago for Cleveland at 7 a.m. on Aug. 30, 1882. It arrived at the new olive green, slate roofed, Rocky River station, which was decorated with flags and bunting for the occasion, and picked up Daniel Eels from among the large crowd in attendance. He joined the other railroad officials on board and they arrived at the new Broadway Station, south of downtown Cleveland at about 5 p.m., thus making the run from Chicago in 10 hours, including stops. According to the Cleveland Herald newspaper of the next day the trip thus far had been very satisfactory, the roadbed in better condition than anticipated and everything about it looked most encouraging.

The officials spent the night in Cleveland and then continued on, arriving in New York on Sept. 1. After this successful inspection trip the general contractor handed over the possession of the railroad to the company with a bill for services rendered in excess of $18 million. The 600 miles of tracks (including sidings) had been completed in less than 600 days. Everyone but William H. Vanderbilt was well pleased.