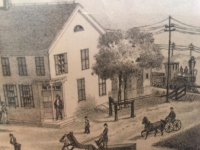 The Nickel Plate Railroad passed behind the residence and tavern of Peter Schmidt in Rockport Township. This drawing was most likely published in an atlas between 1882 and 1884. Photographed by Will Krause.

The Rocky River “Dummy” Railroad provided a portion of the original route for the Nickel Plate. At least one source says that a “Dummy” Railroad was so called because the steam engine was concealed in a streetcar-type body so that the engine would induce less fear in horses. In these early years streetcars were still pulled by horses so horses were familiar with them.

Other sources say “Dummy” meant the engines were smaller, produced less steam and smoke, and were extremely quiet relative to other types of locomotives. The Rocky River railroad was a narrow-gauge line with a small engine, so this could be possible.

A third theory is that “Dummy” referred to the fact that the engines were not smart enough to turn around (because they had no turn table) so they had to back up for a return trip. This last reason may be the most plausible for the Rocky River line because early maps do not show any way for the train to turn around at either end of the single-track route.

One end of the Rocky River railroad was located between what are now West 58th and West 59th streets within the Bridge Avenue right-of-way in Cleveland. The other end was just west of where Sloane and Edanola avenues intersect in Lakewood – this is just southeast of where Lake Road (formerly known as “Sloan Subway”) currently passes under the Nickel Plate (now Norfolk Southern) tracks before they cross over the Rocky River.

One source says the reason railroad magnate William H. Vanderbilt routed the New York Central Railroad to dip south into Olmsted Falls was to avoid the cost of bridging the high bluffs of the Rocky River closer to Lake Erie.

When the Nickel Plate planners purchased the Rocky River railroad in 1881 the proprietor of it said he was glad to get rid of it because even with careful management he was only able to break even on the line. The purchase gave the Nickel Plate valuable right-of-way and a terminal point within Cleveland city limits and provided a point of connection for the road after it had crossed the Cuyahoga Valley from the east.

After less than 600 days of construction, the first test run over the new tracks was completed. It was marveled that a train could make a run from Chicago to Cleveland in 10 hours – an average of 33-1/8 miles per hour, including stops – an accomplishment, it was stated, without precedent in the history of railroading which certainly refuted all claims that the road was in any way poorly or cheaply built. Vanderbilt had been spreading “fake news” that it was both!

The first day of operation of the Nickel Plate was Oct. 23, 1882. Early promotional material to advertise the passenger service offered tickets for far-flung residents along the route to visit their Cleveland relatives for the Christmas holidays for just a $1.00 ticket. A copy of a drawing in the author’s possession shows a locomotive traveling behind the residence and tavern of Peter Schmidt in Rockport. The drawing was done sometime before May of 1884 when Schmidt sold the property. This drawing gives a glimpse at what the earliest locomotives of the Nickel Plate looked like.

The New York Central controlled the majority of the stock and could make it either valuable or valueless. The Nickel Plate ran into financial difficulties because of this and was reorganized in 1887.

William R. Krause, AICP I am the Assistant Planning Director for the City of Westlake. I have worked for Westlake for 29 years. I served on the Bay Village Planning Commission for 5 years. I was a member of the Reuben Osborn Learning Center Steering Committee. I was a Board Member and Historian for the Westlake Historical Society and am a Trustee of the Western Reserve Architectural Historians. I have been married to Debra for 38 years and am the father of three grown children, grandfather of two and owner of two Shih Tzu's.