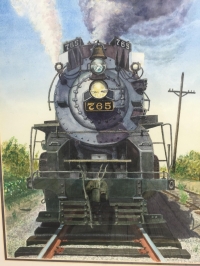 A watercolor of 1930s-era Berkshire locomotive built for the Nickel Plate Railroad. Painting by the late Jack Keeler of Westlake, now in the collection of the Mad River & NKP Railroad Museum, Bellevue, Ohio. Photo by Will Krause

According to Taylor Hampton’s “The Nickel Plate Road,” the initial passenger cars for the Nickel Plate were constructed by the Pullman Palace Car Company in Chicago. They were painted a dull red or reddish-brown color with several gilt stripes around them.

The coaches were finished in cherry, the first-class ones having frescoed satinwood ceilings. The seats were upholstered in crimson plush and had backs six inches higher than ordinary ones. The coaches had toilet rooms and a ladies salon with marble washstand with comb, brush, mirror and towel.

The coaches were heated, lit by oil chandeliers, had large windows and provided with a bucket, an ax, and a saw for use in case of accident. The Cleveland Herald stated that: “In fact although not literally nickel-plated, everything was found to be thoroughly gilt-edged.”

However, as stated in a previous article in this series, the Nickel Plate was re-organized financially in 1887 after only five years of control by William H. Vanderbilt, who ran it as the disadvantaged stepchild of the competing New York Central line. It was the freight cars painted seal brown with white lettering that got the most use. One of the primary uses of the new railroad line became shipping butchered meat quickly overnight in an express train from the stockyards of Chicago to New York.

Nickel Plate employees were very loyal to the company. This loyalty developed to such an extent that a Veterans Association was formed in 1907 for those who had served the road continuously for 25 years or longer. This was the first organization of its kind in the country and the plan later was adopted by many other railroads throughout the United States.

The Clayton Antitrust Act was passed by Congress in 1914 as a strengthening amendment to the Sherman Act of 1890, and the Department of Justice began to look into the stifling of competition through common control of parallel and competing railroad lines. Late in 1915, the U.S. Attorney General notified the president of the New York Central that control of the Nickel Plate and several other railroads constituted a violation of the Act.

At this time brothers O.P. and M.J. Van Sweringen were developing Shaker Heights and needed transportation facilities from downtown Cleveland to Shaker Heights. They purchased the Nickel Plate from the New York Central in 1916. So for 5 miles of needed right-of-way they purchased a railroad of 513 miles!

Under their management, in 1922 the New York Evening Post wrote: “The Nickel Plate, a small freight road independently operated, has prospered since its severance from the New York Central. Business has grown under the new management and the road has been strengthened materially during the six years of independent operation. Nickel Plate is becoming almost exclusively a freighter … furthermore the character of its freight is improving. A better balance is being achieved, as between coal and merchandise haulings. ... This road’s bond issues appear perfectly sound as investments.”

The Van Sweringens purchased additional railroads through some very convoluted financing schemes and incorporated them as part of the Nickel Plate.

On Jan. 1, 1928, the general offices of the Nickel Plate were moved into the Van Sweringens' Terminal Tower – the official opening of the Cleveland Union Station was in 1930. By 1935 the Van Sweringen empire had collapsed and they had both died. Ownership of the Nickel Plate transferred to George A. Ball, the Mason jar king who had financially come to their aid in the last months of their lives.

Taylor Hampton writes: “The Nickel Plate Road was built as a single road. It soon passed under the suppressing domination of the New York Central and it gained its freedom and two new divisions, the Clover Leaf and Lake Erie and Western under the Van Sweringens. It then became one of three in the family of Nickel Plate, Chesapeake and Ohio, and Pere Marquette, and today [1947], after sixty-five years, it is again an entity of its own with control of the Wheeling and Lake Erie. The Wheeling, with its 503 miles of track, traverses active coal fields and has connections of interchange of freight with the Nickel Plate at Cleveland, Bellevue, Fremont and Toledo. This adds yet another link in an expanding road.”

The Nickel Plate, like all railroads, experienced heavy use during World War II, and this took its toll on the physical plant, it once again entered a period of financial difficulties and the leasing of the Wheeling and Lake Erie was a last-ditch attempt to make the railroad financially solvent again. The Nickel Plate became part of the Norfolk and Western railroad in 1964.

The line ran its last passenger trains along the former Nickel Plate on Sept. 9, 1965. They had stopped using the depot in Bay Village some time before this because it was in 1962 that the Dover/Bay Village Station was moved to Huntington Park for use by Baycrafters, now known as BAYarts.