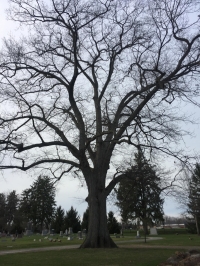 The Committee on Moses Cleaveland Trees of the Sesquicentennial Commission was chaired by Arthur B. Williams, curator of education at the Cleveland Museum of Natural History. It was estimated that there were thousands of such trees deep in the remote parts of the Cleveland Metroparks where they were still pretty much inaccessible to the public in 1946.

How the Sesquicentennial committee proceeded was to publicize their program and request residents of northeast Ohio to nominate trees in their communities. It was important for the nominated trees to meet the 150-year age but also to be in a location where they were accessible to the public or at least visible from the road. There were 242 trees nominated.

Dover Village Mayor Hugh Price nominated oak trees in the Clague Park woods along Hilliard Boulevard; one red oak and six white oaks there were selected as Moses Cleaveland trees by the committee. A pin oak tree in a backyard at 966 Cahoon Road and an elm tree at 29144 Center Ridge were also selected.

These trees, along with three in Bay Village (a white oak in Cahoon Park along the ravine north of Lake Road, a black oak on the east side of Cahoon Road just south of the middle school, and a cottonwood on the north side of Lake Road 100 feet east of Bassett Road), made the cut. Therefore the area of the original Dover Township accounted for over 7% of the Moses Cleveland Trees designated in 1946.

Unfortunately, as the recent Observer article noted, all three of the Bay Village trees are now gone. These original trees were each marked with a metal plaque describing the species of tree and explaining that the tree was standing when Cleaveland first landed.

It is unclear how many trees were designated as Moses Cleveland trees after 1946. Current officers of the Early Settlers Association do not have that information. We do know that a silver maple at the top of a cliff at 29318 Lake Road in Bay Village was labeled subsequent to the original 150 but it too has since been lost to the lake.

At least two additional trees in Westlake were subsequently designated as Moses Cleaveland trees. They are an existing red oak at the rear of Evergreen Cemetery and an existing white oak east of the former Pat Catan's (now Travel Centers of America) at 24839 Center Ridge that were plaqued in 1986.

The pin oak in the backyard at 966 Cahoon Road may still be there but it is impossible to verify it from the street. The elm tree on the roadside at 29144 Center Ridge, nominated by Mrs. Walter H. May in 1946, probably succumbed to Dutch Elm disease or road widening years ago. What about the Clague Park oaks?

In May 2012 a blogger for “216 and Counting” attempted to locate all of the previously plaqued Moses Cleaveland Trees in Clague Park. They may have located as many as five of them. They definitely found at least one. The plaque on it was not an original 1946 one, but was a “Super Sesqui” plaque placed in 1971 by the Early Settlers Association for the 175th anniversary. It did identify the white oak as a Moses Cleaveland tree. There is a picture of it on the blog and the plastic plaque is broken. In 2012 the trunk measured 152 inches in circumference, putting it at 48 inches in diameter. Unfortunately the tree was dead and rapidly deteriorating.

I did my own search for this plaqued tree and found a large dead standing oak but no plaque. I contacted Westlake’s city forester Stan Barnard who told me he thought the plaqued tree might have been one that has fallen over since 2012 and the plaque may have been stolen off of it by vandals. As for the standing dead oak that I had found, he said that they choose to keep the dead trees standing to provide habitat when they can. He said that white oaks may live 200 to 300 years with some even older specimens known.

The good news is that there may be many trees still standing in Westlake and Bay Village that were growing when Moses Cleaveland landed in 1796. To estimate if a tree on your property or in your neighborhood is 223 years old or older check out the methodology that Arthur B. Williams used on the Cleveland Museum of Natural History's website at cmnh.org/mosescleavelandtrees.

A huge oak tree in the front yard of 28189 Detroit Road is anywhere from 259 to 324 years old depending on if it is a red oak or a white oak (starting life anywhere from 1695 to 1760). Using the dating methodology on another oak in the same front yard (which was recently cut down due to heavy damage when a large limb broke off), was anywhere from 96 to 120 years old depending on the type of oak tree it was. I counted 112 annual growth rings on the stump. The house it was growing in front of was built approximately 109 years ago so it is pretty safe to say that the tree was planted when the house was new.

Bay Villagers take heart, a white oak growing behind 24736 Lake Road, is a whopping 18 feet in circumference, 68” in diameter, and is approximately 344 years old. It may have been growing in 1675, when the Massachusetts Bay and Plymouth colonies were still going strong and about when Moses Cleaveland’s great-grandfather was born.

Thanks to the many years of loving care of the recently deceased Abigail Sammon, it continues to thrive above the shore of Lake Erie. Her heirs plan to place a conservation easement around the tree so that whatever may happen to the property in the future, this magnificent tree will be preserved.