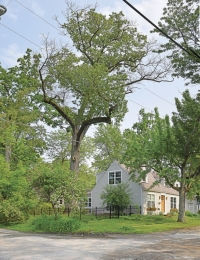 One of the benefits of all the recent rain is that the trees in Westlake and Bay Village, both young and old, have never looked so lush.

After my article “Moses Cleaveland Trees in Westlake” appeared in the June 4 edition of this publication the editor was notified of another plaqued Moses Cleaveland tree still extant in Bay Village. It is located in a fenced yard at 24919 Sunset near the southeast corner of Sunset and Forestview roads.

The plaque identifies it as a black oak plaqued in 1971 during Cleveland’s Super Sesquicentennial Anniversary (175 years). As the photograph shows, it is displaying the dieback of some of its branches that naturally occurs in trees of great age.

The same bloggers on “216years.blogspot.com” who in 2012 attempted to locate a number of the Moses Cleaveland trees plaqued in 1946 in Clague Park discuss two other 1946 plaqued trees in the Cleveland area which were known to still have their original metal 1946 plaques in 2012.

One was a massive white oak in a tree lawn on Summit Avenue in Lakewood which was just cut down in 2018 due to safety concerns. The approximately 320-year-old tree was rotting from the inside to the extent that the trunk was practically hollow, according to Lakewood Arborist Chris Perry. The other, located on Chagrin River Road in Hunting Valley, is a sugar maple that still appears healthy.

The sugar maple is located approximately one-half mile north of Shaker Boulevard near 3051 Chagrin River Road. I was able to locate and photograph it as well as the original metal plaque which reads:

THIS IS A MOSES CLEAVELAND TREE

IT WAS STANDING HERE AS A PART OF THE ORIGINAL FOREST WHEN MOSES CLEAVELAND LANDED AT THE MOUTH OF THE CUYAHOGA RIVER JULY 22, 1796. LET US PRESERVE IT AS A LIVING MEMORIAL TO THE FIRST SETTLERS OF THE WESTERN RESERVE.

The sentiments are excellent but unfortunately these trees do have a natural lifespan, which many of them are bumping up against. Unlike the sequoia or bristlecone pines which grow in the western United States and can live for thousands of years, the most long-lived trees here probably won’t exceed 400 years.

Fortunately Westlake has had a tree ordinance since 1989 which has saved tens of thousands of trees of many sizes and ages. Developers cannot just clear cut sites without a plan in place to preserve as many trees as possible. There is also a requirement to save or plant a certain number and caliper (diameter) inch of trees on a property which acts as an incentive to save trees because every caliper inch of tree that they save is one less caliper inch that they need to plant – so saving trees actually saves money at the front end of a new development, with large caliper inch trees the most valuable in this regard.

I learned that the Bay Village Tree Commission, Bay Village Law Department and Bay City Council are discussing a tree ordinance for Bay Village, recognizing that the mature tree canopy is an important part of Bay Village’s character. Discussion of it can be found on the Bay Village website under the minutes for the Committee Meeting of Council held June 10, 2019.

Bill Sammon, the son of Abby Sammon who had lovingly cared for an approximately 340-year-old oak tree on her property for many years (discussed in the last article), told me that a Cleveland-based businessman Johnny Smatana (who goes by the name Johnny S) had collected acorns from that tree in 2017 and 2018 to propagate seedlings which carry those long-lived genes. He can be contacted through his website at www.johnnyvillewoods.com. His business is located in Suite 30 of the Euclid Arcade at 530 Euclid Avenue. The Euclid Arcade is now known as part of the 5th Street Arcades in downtown Cleveland. As of this date several dozen of the baby oak trees are available.

Whatever your opinion and attitude about climate change, an undisputable fact is that trees capture and store carbon, 100% naturally. If each of us plants a new tree every day (or every week, month or year) think of all the carbon that can be sequestered by the time of their sesquicentennial!